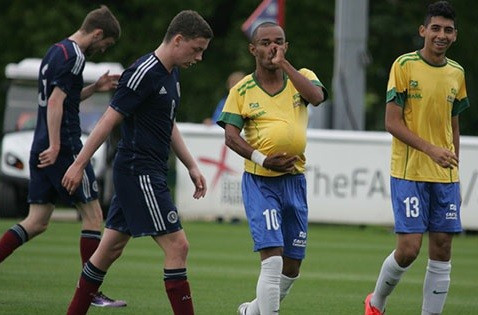 Reigning Copa América champions Brazil showed why they are one of the pre-tournament favourites after they hammered Scotland 6-0 at the Cerebal Palsy Football World Championships at St George’s Park in Burton upon Trent in England.

The highly-fancied Brazilians were expected to win comfortably owing to their world football pedigree and they made light work of the Scots.

Jose Carlos netted twice while Jan Francisco, Fernandes, Jonatas and Wanderson, widely regarded as one of the top players in the world, also got on the scoreeshet as they breezed to a dominant opening win in Group C.

In the other match in the group, Kevin Hensley’s double helped the United States cruise to a 3-0 victory over Venezuela.

Hensley’s deflected effort after 15 minutes put the American side in front, before heroics from goalkeeper Keith Johnson denied Venezuela a swift equaliser.

The US then seized control of the match and they doubled their advantage when Hensley rounded off a swift counter-attack, and Bryce Boarman put the gloss on the performance by adding a third shortly after.

The Netherlands, one of only four professional teams at the tournament, surged to the top of Group D by virtue of a commanding 4-1 victory against Argentina, in which Iljas Visker scored twice and Minne De Vos and Lars Conijn also found the net.

The Dutch side raced into a 2-0 lead before Matias Bassi pulled a goal back with a powerful strike from distance.

But it was to be a mere fleeting moment of success for the Argentina side as The Netherlands went on to seal a comfortable win.

Elsewhere, Canada earned a 3-1 success over Northern Ireland in the closest of the day’s four matches.

Dustin Hodgson, Trevor Stiles and Sam Charron gave the Canadian team the perfect start to the competition and they sit second in the group behind The Netherlands.

The tournament is due to continue tomorrow when European champions Ukraine begin their campaign against Japan after they were awarded a walkover in their first match following Iran’s withdrawal over visa problems.

In Group B, Russia play Portugal and Australia face the Republic of Ireland.

The seven-a-side competition also forms part of the qualification process for next year's Paralympic Games in Rio de Janeiro.