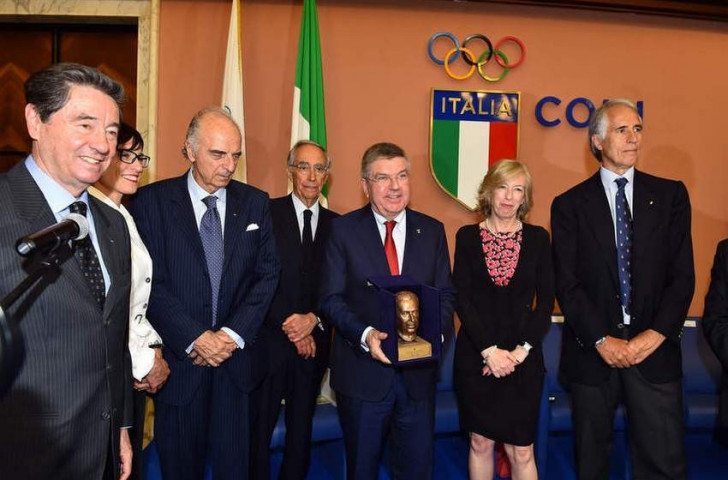 Medal ceremonies could take place at the Colosseum if Rome is successful in its bid to host the 2024 Olympics and Paralympics, the city's Mayor Ignazio Marino has revealed during a visit by International Olympic Committee (IOC) President Thomas Bach to the Italian capital.

The bid, one of three confirmed ones for the 2024 Games, is widely seen as an outsider following the city's sudden withdrawal from the 2020 bidding process in 2012.

As in 2012, economic problems are still seen as a major challenge, both within the city and the country as a whole.

But during his visit, which included a meeting with Italian President Sergio Mattarella and many other prominent sporting officials, Bach said Italy was “very well placed” to launch a bid, despite warning the process would not be easy.

“With your great attachment to Olympic ideals, with your athletes and your love of sport you will have a strong bid,” he said, adding:

“But you will face strong competition.”

Bach said he liked the Mayor's idea of medal ceremonies at the Colosseum before joking, “as long as the lions don’t then arrive".

A victory for barefoot Ethiopian marathon runner Abeba Bikila took place close to the Colosseum around the Arch of Contantine in 1960 on the only other occasion Rome has hosted the Games.

St Peter's Square in the Vatican has also been cited as a potential archery venue this time around, while, in what would take advantage of the extra flexibility encouraged as part of the IOC's Agenda 2020 reform process, events could also be held in Florence, Naples and Sardinia.

Boston and Hamburg are other cities confirmed as bidding for the Games, with Paris and Budapest poised to launch similar bids before the process for submitting applications ends on September 15.

Bach began his visit at the Palazzo Quirinale for a meeting with Mattarella, as well as Italian National Olympic Committee head Giovanni Malagò and IOC members Franco Carraro and Mario Pescante, with the supposed benefits sport brings wider society discussed in addition to the Olympic bid.

The world has many problems, Mattarella said, but sport is an antidote because it enters the hearts and minds of people.

Bach then met Rome's bid chief, the former Ferrari boss Luca Cordero Di Montezemolo, before being presented with the “Onesti Award” named after former CONI President Giulio Onesti, who led the organisation for 34 years between 1944 and 1978.

Bach was praised for “immersing himself in his work with passion” and for “carrying out reforms whilst also respecting tradition" after following Presidential predecessors Juan Antonio Samaranch and Jacques Rogge in winning the award.

Ricci Bitti has been a major ally of Bach in the ongoing feud with SportAccord President Marius Vizer since the latter fiercely criticised Bach and the IOC during last month's SportAccord Convention in Sochi, with both figures having this week been invited to a meeting with Vizer in an attempt to clear the air.