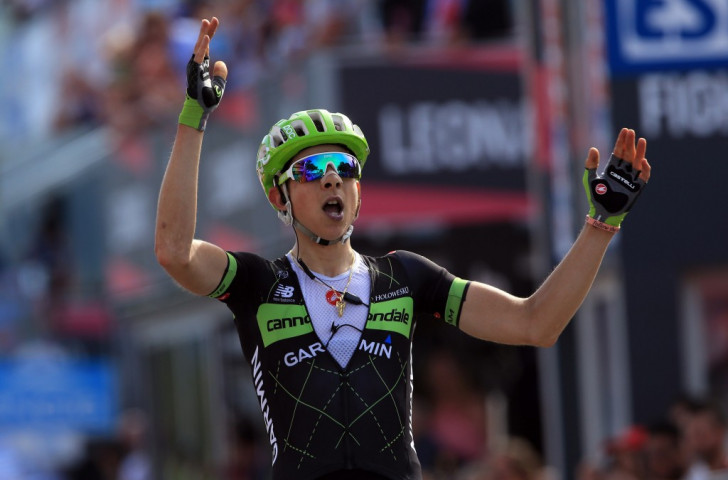 Formolo was clearly buoyed by the raucous home crowd all desperate to see him take the win, and he did not disappoint as he crossed the line at the end of the 150 kilometres stage, 22 seconds ahead of Orica GreenEdge’s Simon Clarke of Australia following a perfectly-timed attack.

It, nevertheless, proved to be a successful day for Clarke as, despite finishing behind Formolo, he snatched the pink jersey from Australian team-mate Michael Matthews on another thrilling day in Italy.

“I tried to go in a breakaway in the second last climb but the other riders caught me,” the Italian said following his historic victory.

“I tried again on the last climb and luckily I could go to the finish line alone.”

Race favourite Alberto Contador, who competes for Tinkoff-Saxo, languished down in ninth place but he managed to avoid any true damage to his overall chances of winning the 31-stage epic after he finished among the likes of Clarke and Team Sky’s Australian rider Richie Porte.

The stage provided an immense spectacle for those who lined the streets and they gratefully saw Formolo launch an attack with around 13 kilometres to go on the final climb.

The 22-year-old, regarded as one of the hot prospects in the sport and touted as a future Grand Tour winner, reached the top with an advantage of half a minute and it was one he did not relinquish as he held on to secure a fantastic personal triumph.

Clarke, meanwhile, revelled in keeping the pink jersey within his Orica Green-Edge team, who have been the standout performers at this year’s event thus far.

He is the third Australian in the race to hold the jersey.

“You saw the emotion crossing the line, I was stoked to keep the jersey in the team, to be able to take the jersey and keep it for Orica for another day,” he said.

“Michael Matthews and Simon Gerrans have had great days and today it worked for me.”

Tomorrow’s stage five will see the hill-climbers come to the fore as the 152 kilometres route provides the first proper mountain stage, which takes place from La Spezia to Abetone.