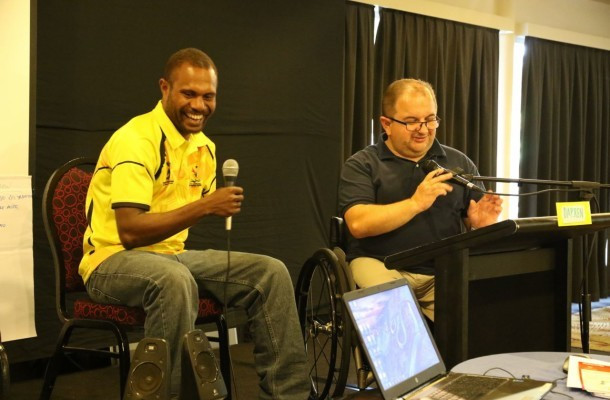 Port Moresby 2015 have held a disability awareness workshop aimed at helping the Organising Committee increase their knowledge of people with disabilities ahead of the Pacific Games in the Papua New Guinean capital from July 4 to 18.

The event was attended by representatives from the Papua New Guinea Paralympic Committee, 150 members of Organising Committee staff and Paralympic silver medallist Francis Kompaon, an ambassador for the Games.

Kompaon, second in the T46 100 metres race at Beijing 2008, and offered attendees a personal reflection on his life and career.

“It was all about my state of mind and outlook on life that pushed me along,” he said.

“I didn’t let my physical disability get in the way of whatever I wanted to do.

“I always came out the fastest, they were surprised, wondered how I did it.

“Don’t try to help them [people with disabilities] if they don’t ask for it, just let them try for themselves.”

The Pacific Games is set be the biggest sporting event in Papua New Guinea’s history and Port Moresby 2015 are attempting to make the spectacle as inclusive as possible.

During the workshop, Organising Committee staff underwent disability awareness training in order to overcome any concerns and to enhance their understanding about people with disabilities.

“With athletes, spectators and potentially contractors and staff with disabilities involved, it is important that everyone is aware of what they need to do within their operational arrangements to cater for people with a disability,” Port Moresby 2015 chief executive Peter Stewart said.

“The Disability awareness training is an important part of the Organising Committee's vision in creating an inclusive environment and experience for all to enjoy.”

Also in attendance was Australian wheelchair tennis star Darren Cunningham, who facilitated a question and answer session with Kompaon and he also shared his own view to those who had attended the workshop.

“Sport offered me a whole new world, away from pain and recuperating,” he said.

The two-week long Pacific Games will see about 3,000 athletes from 21 nations compete across 28 different sports, with some offering athletes the chance to earn qualification for the 2016 Olympic Games in Rio de Janeiro.