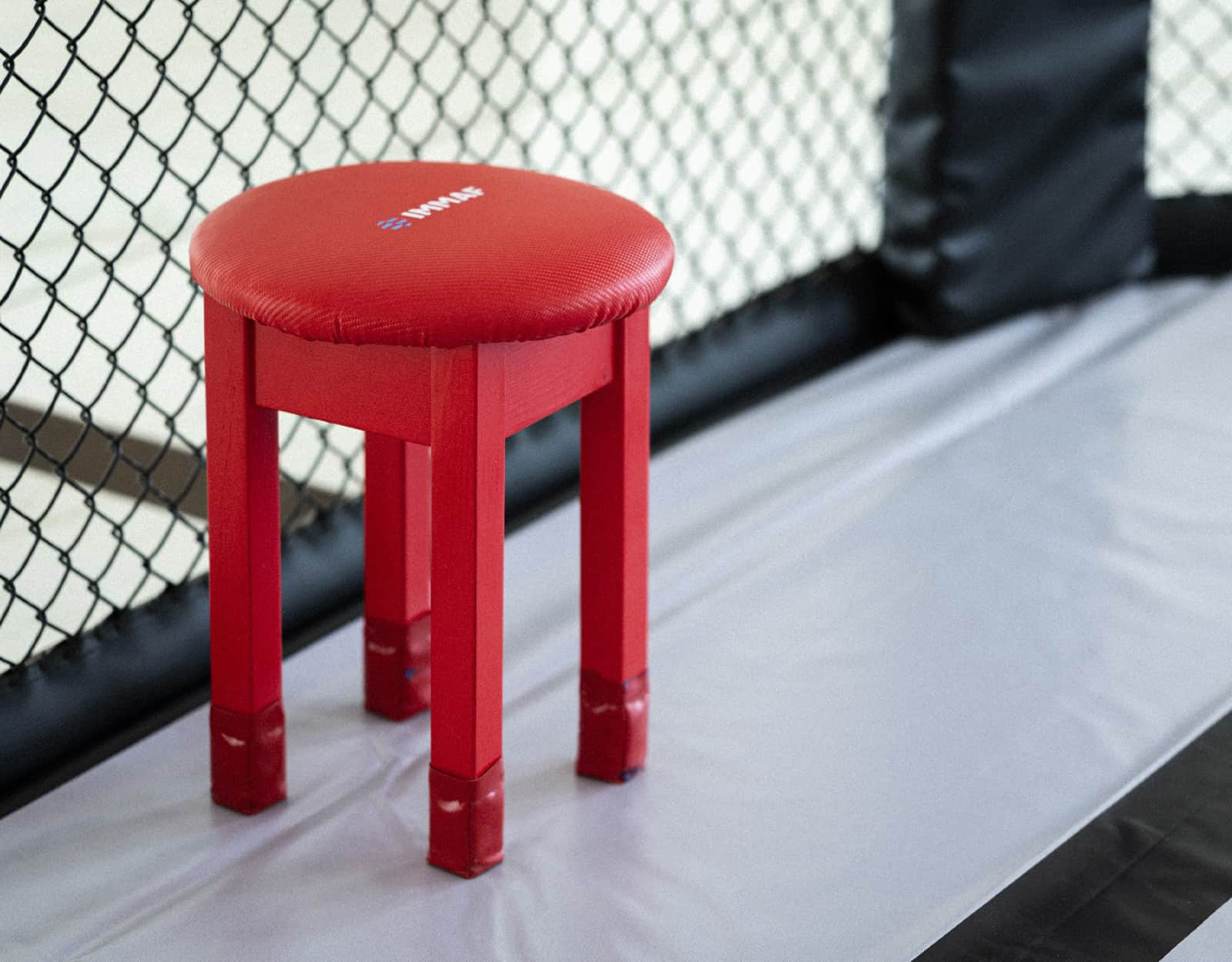 The field of play for MMA is a circular, octagonal or hexagonal fenced enclosure (without a roof).

This structure allows for a fluid contest with little interference required from referees to reset the match, creating a neutral arena to best showcase the athletes' skills.

Its robust plastic-coated fences eliminate the chance of athletes tumbling out of the ring when applying wrestling takedowns, enhancing athlete safety. The ring consists of a canvas, safety padding and fences as specified in the IMMAF Amateur MMA Rules and the Professional Unified Rules of MMA.

The fighting area can also be a circle or a hexagonal shape and must be no smaller than 20 feet by 20 feet and no larger than 32 feet by 32 feet in diameter.

The floor must have at least a 40 millimetre layer of high-density foam padding, which extends beyond the ring and fighting area and over the edge of the platform.

The fenced area around the ring must have two gated entrances, preferably on opposite sides of the fenced area and there must not be any obstruction on any part of the fence surrounding the area in which the contestants are competing.

For support staff, ring stools will be provided in the blue and red corners, representing each athlete. The event organiser for each bout will provide each athlete with a clean water bucket and towel and a clear plastic bottle containing water. These are the only fluids allowed to be drunk during the competition. 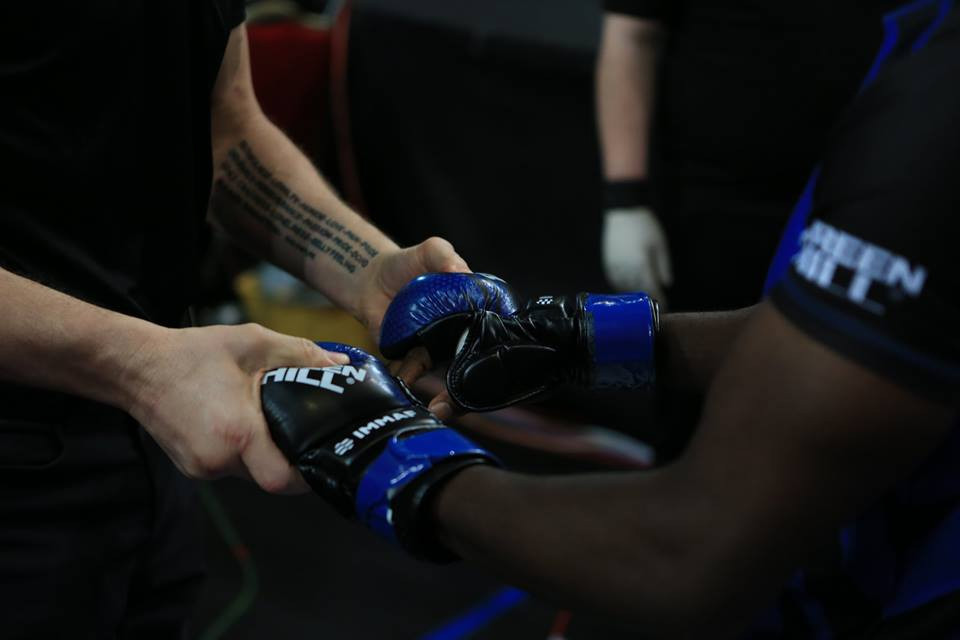 As part of its amateur MMA rules, the IMMAF has compulsory equipment that athletes must wear when competing.

Competition kit must either be red or blue.

Gloves and shin guards should be new for all events and in good condition.

If they are not, they must be replaced and supplied by the host authority with prior approval from the IMMAF Technical Committee.

The padding on gloves must weigh between six and eight ounces and contestants are not permitted to supply their own gloves. The gloves need to be open-handed with finger and thumb loops for grappling.

Shin guards cannot have Velcro type strap fasteners. Instead, the preferred type is a tight pull-on sock shin guard.
Rash guards must be made of a tight fighting stretch material and be short-sleeved. They can carry the three-letter country code on the upper back of the garment.

Shorts must not have pockets, zips, fasteners or any foreign substance other than the material of the shorts, while lace-up waistbands on shorts must be inside the shorts. Shoes are not permitted for athletes.

Other mandatory equipment includes mouthpieces, a rash guard to prevent burns for women and a protective groin cup for men.

If a mouthpiece is involuntarily dislodged during the match, the referee will call time to replace it when it does not interfere with the immediate action. For example, not while a submission is in place and only when a move has come to its natural end.

Groin cups and chest gear is also optional for women, while knee and ankle protection is optional for both men and women.

The IMMAF adopts the Unified Rules of MMA, and prohibits certain other techniques.

Elbow and forearm strikes are banned, as are heel hooks - a ground submission move that twists the heel and can cause serious ligament injury.

Knees to the head are prohibited as well as twisters - a neck crank submission. Sit through crucifixes and any other submissions that apply pressure to the spine are also outlawed.

Any fouls can cause an athlete to be penalised.

Others fouls include fish hooking - hooking your finger inside the nostril or mouth of an opponent - and spiking your opponent into the mat head or neck first - otherwise known as a piledriver.

Stomping on a grounded athlete, throwing an opponent out of the ring, clawing, avoiding contact, faking injury, using abusive language, disregarding referee instructions, unsportsmanlike conduct, attacking an opponent after the bell has sounded or on the break, interference from an athlete's corner and applying any foreign substance to the head or body to gain an advantage all also count as fouls.

Banned foreign substances can include Vaseline, grease, grooming creams, lotions and sprays. Jewellery and other piercings are not permitted while competing.

Disqualification can occur after a combination of fouls or after a single flagrant foul, and fouls can also result in points being deducted in the scoring.

The referee must inform the three judges and the official scorekeeper of any points deductions or a disqualification; and only the referee can call a move a foul and score it as such.

Warnings can also be given for holding or grabbing the fence, holding onto your opponent's shorts, gloves, shin guards or rash guards, and having the fingers outstretched, palm parallel to the floor towards the opponent's face.

Permission to strike a downed opponent on the ground has been a contentious rule in the sport's history, but research in the Journal of Sports Science and Medicine has suggested that MMA is safer than boxing.

Strikes on the ground are restricted in type and in application with respect to safety. The referee can stop the match at any time if either athlete is not effectively defending themselves.

An IMMAF match contains three rounds of three minutes each, with a round break of 60 seconds in between.

All contests are evaluated and scored by three judges, who will score athletes out of 10.

A match can be ended and won by knock-out; submission, confirmed when an opponent physically or verbally taps out; or by a technical knockout, when a referee stops the match by their own discretion or on the advice of the ringside physician or the athletes' corner team.

A technical knock-out takes place when it is deemed by the referee that a competitor is no longer reasonably defending themselves, or an athlete has incurred an injury that renders them unable to continue.

There are many ways that an athlete can win on the decision via scorecards, including unanimous decision, when all three judges score the contest for the same athlete.

Matches can end in disqualification, forfeit, technical draw, technical decision and no contest as well.

Where an intentional foul has led to an injury that stops the match, the fouling athlete will lose by disqualification. If the injury is not deemed severe enough to terminate the match, the intentional fouler will be given a two-point deduction, and if the injured athlete later has to retire due to their injury, they will be awarded the decision if they are ahead or given a technical draw if they are level or behind in the scoring.

Any accidental injury which warrants the match to be stopped will result in a no contest ruling if the bout is stopped before two rounds have been completed.

The match will be ruled by technical decision if it has passed this threshold, and given in favour of whoever is ahead at the time.

In a tournament format where progression is necessary, no contests and draws cannot be applied, and in the case of a draw after three rounds an overtime fourth period is contested.

If the fourth period ends in a score draw, but one athlete has received a point deduction for a foul, the penalised athlete will be eliminated.

Effective striking and grappling is considered the most important area to assess for scoring, with cage/ring control - where proactive movement is rewarded - only considered if all other criteria makes both competitors completely even.

Successful execution of legal blows, takedowns, submission attempts, reversals and the achievement of advantageous positions that potentially contribute to the end of the match will weigh heavier in the scoring than cumulative offence.

Submission attempts that cause an opponent to tire and weaken and take considerable effort to escape from are also given greater weight in scoring.

Impactful throws and takedowns, as well as high amplitude - a move that involves the lifting and slamming of an opponent - are also weighted heavier than a trip or bundle to the mat.

Effective aggressiveness is considered, too, which relates to aggressive striking and grappling, but there is no reward for chasing an opponent without a result or impact.

Only after this will cage/ring control be considered in the scoring.

A 10-10 round is rare and only used when there is no difference or advantage between fighters. A 10-9 round shows one athlete being marginally superior while a 10-8 round shows a large margin between the two athletes. A 10-7 round is another rare occurrence and only given when one fighter has completely overwhelmed their opponent.

There are 10 IMMAF men's weight classes and six for women. Amateur contestants are weighed on the same day of the competition, and each subsequent day of competition at events like the World Championships.

The men's weight classes are:

The women's weight classes are:

Suspensions are handed out to athletes who are knocked out as a result of a blow to the head, or whose match is stopped by a judge because of several blows to the head which has left them defenceless and unable to continue.

Starting from the day of the match in question, an athlete will be suspended from competition and sparring matches for a minimum of four weeks for one knockout, a minimum of three months for two knockouts in a three-month period and a minimum of 12 months for being knocked out three times in a 12-month period.

These suspensions can be extended at a physician's discretion.

If a match was not stopped, the physician still has the right to decide on a suspension if they deem that an athlete has sustained too many hard blows to the head.

Only referees and the ringside physician can enter the ring during competition, while the referee is the only individual authorised to stop a contest.