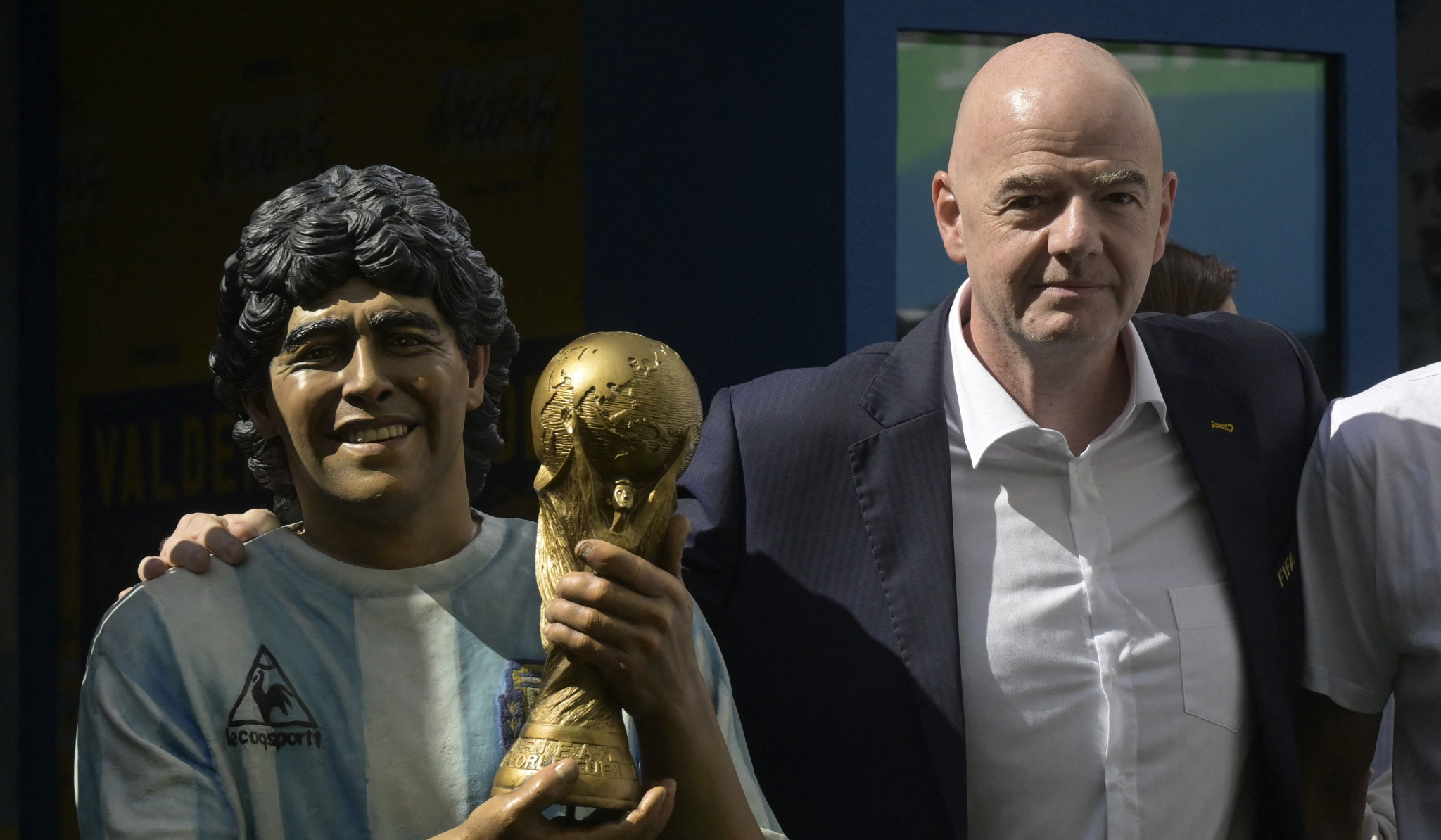 FIFA President Gianni Infantino has suggested a day be set aside at all future World Cups to celebrate Diego Maradona.

The ongoing World Cup in Qatar is the first edition of the event to be held since Maradona's death in November 2020.

Infantino was joined by South American Football Confederation (CONMEBOL) counterpart Alejandro Domínguez and some of Maradona's team-mates from the 1986 tournament to commemorate the second anniversary of his passing yesterday.

A statue of Maradona was unveiled, aside a symbolic plant dubbed the "Tree of Dreams".

"Diego is immortal, Diego is with us," Infantino said.

"We should not only pay tribute, but also celebrate Diego.

"In fact, I would like that from now on, in every World Cup, we should have a day to celebrate Diego Armando Maradona.

"Because, what this man did to make people fall in love with football, with our sport... very, very few, perhaps nobody else, did what he did."

Widely considered one of the greatest footballers of all time, Maradona was the player of the tournament when Argentina won the 1986 World Cup in Mexico.

Maradona helped Argentina finish second at the 1990 tournament and also played in World Cups in 1982 and 1994.

The latter ended in disgrace as Maradona was sent home after failing a drugs test.

Maradona managed Argentina in the 2010 World Cup, when they were thrashed 4-0 by Germany in the quarter-finals.

Maradona won Serie A twice with Napoli, which remain the club's only top-flight league titles.

Naples' San Paolo Stadium has been re-named the Stadio Diego Armando Maradona in his honour.

Maradona died from a heart attack in 2020.

Before that, Maradona had had health issues including addiction to recreational drugs, struggles with his weight and hepatitis, while concern for his well-being had also been raised on several occasions after erratic public appearances, including at the 2018 World Cup.

Yesterday's commemoration took place at a CONMEBOL facility in Doha at a time when four South American countries, including Argentina, are lobbying to host the 2030 World Cup.

Uruguay, Paraguay and Chile are also part of that bid, with the tournament coinciding with the 100th anniversary of the first-ever World Cup in Uruguay.

CONMEBOL has endorsed Infantino for re-election as FIFA President.

The Swiss-Italian official faces no rivals so is set to be re-elected unopposed at a Congress in Rwanda in March.

Infantino's comments on Maradona are likely to be far less controversial than other statements the FIFA leader has made in Qatar, including a bizarre pre-tournament monologue in which he claimed "I feel gay", "I feel a migrant worker" and "I feel Qatari" in an attempt to dismiss criticisms of Qatar hosting the World Cup based on its record on human rights.