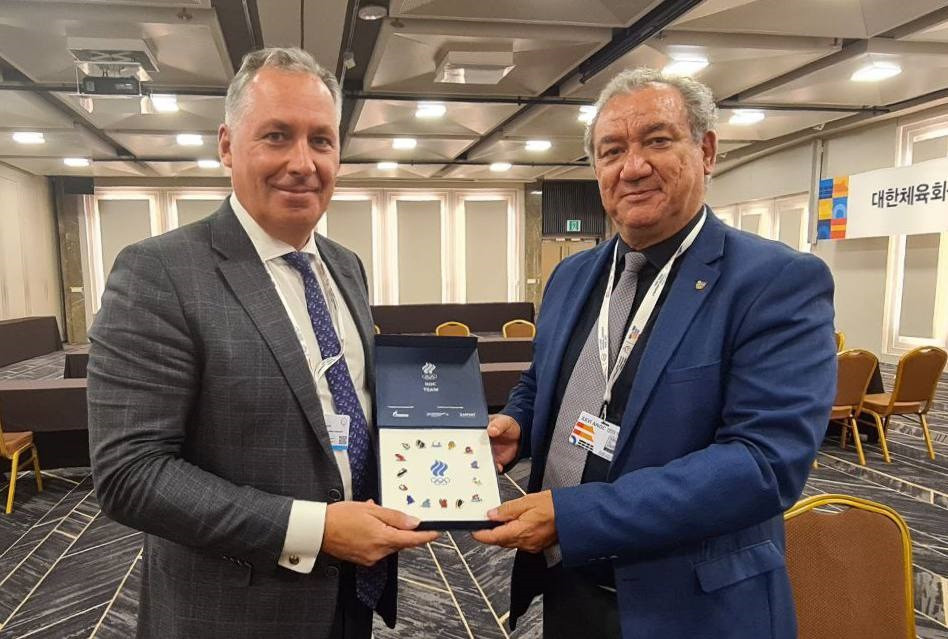 The Russian Olympic Committee (ROC) is seeking to secure cooperative agreements with South Africa, Mali and Peru following meetings on the sidelines of the Association of National Olympic Committees (ANOC) General Assembly here.

ROC President Stanislav Pozdnyakov has claimed that his organisation is "preparing to sign memorandums of cooperation" with the Sport African Sports Confederation and Olympic Committee (SASCOC), the National Olympic and Sports Committee of Mali (CNOSM) and the Peruvian Olympic Committee (POC).

Pictures have emerged on Pozdnyakov's Telegram channel of him in talks with SASCOC President Barry Hendricks and CNOSM leader Habib Sissoko in the South Korean capital.

SASCOC has denied any agreement has been reached and pointed out that officials had also held meetings with other National Olympic Committees.

"We are both bound by the IOC’s position on Russia," Hendricks said.

The Russian official believes that the ROC is "expanding the circle of partners and friends" after attending the ANOC General Assembly.

"With colleagues from the NOCs [National Olympic Committees] of South Africa, Mali and Peru, we are preparing to sign memorandums of cooperation," said Pozdnyakov.

"In particular, more and more NOCs are interested in our capabilities in education and training of coaches.

"Representatives of our NOCs will discuss the details of the agreements, but I suggest not to waste time on formalities and move on to the practical implementation of what we agreed on during the working meetings as soon as possible.

"It can be firmly said that the Russian Olympic Committee is expanding the circle of partners and friends.

"And just today we held meetings with the NOCs of several countries, including the Republic of Korea, South Africa, Mali, Mauritania, Namibia and Peru."

Russia and South Africa are both members of BRICS, a political alliance that also includes Brazil, India and China.

Russian Sports Minister Oleg Matytsin has previously claimed that his country is developing new sports competitions with BRICS partners as well as Kazakhstan, Kyrgyzstan and Pakistan that are members of the Shanghai Cooperation Organisation.

National Olympic Committee and Sports Confederation of Denmark President Hans Natorp and his team walked out of the auditorium during a video presentation by Podznyakov.

Natorp accused Podznyakov, who is chair of the ANOC Culture and Education Commission, of using "inappropriate propaganda" in the videos that featured two events which had taken place in Russia since the outbreak of the war in Ukraine.

The Danish official has criticised the International Olympic Committee for continuing to spare Russian and Belarusian sporting leaders of sanctions, while athletes from the two countries remain banned.

ANOC Acting President Robin Mitchell admitted that he had not seen the videos showed by Podzynyakov before they were broadcast at the meeting and added that one of them would not have been presented if he had viewed it beforehand.

insidethegames has contacted the CNOSM and POC for comment.