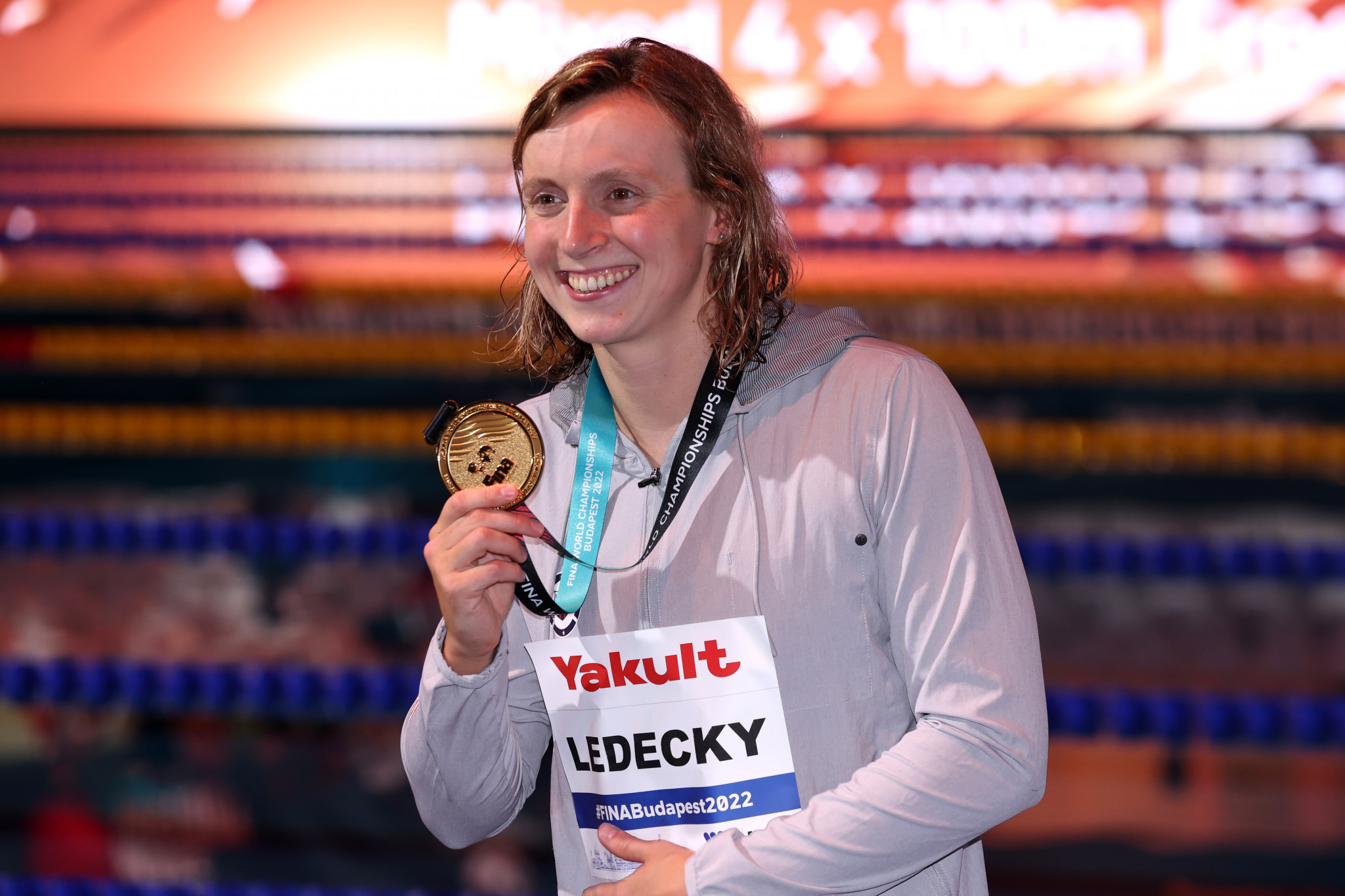 In winning the race by more than 10 seconds, Ledecky became the first swimmer to take gold at five consecutive World Championships in the same event.

It also extended her record as the most decorated female swimmer at the FINA World Championships, with this her 22nd medal on this stage.

Moreover, Ledecky is now alone in second place on the list of all-time World Championships gold medallists, with only compatriot Michael Phelps with 26 able to beat the 25-year-old's haul of 19.

Ledecky cruised to victory in 8min 8.03sec in an event which she has won at the last three Olympics.

Kiah Melverton of Australia claimed her first individual medal at the World Championships by taking second place in 8:18.77, while Tokyo 2020 bronze medallist Simona Quadarella of Italy achieved the same finish in Budapest with 8:19.00.

In the first final of the day, Sarah Sjöström of Sweden continued her domination of the women's 50m butterfly, and closed in on Phelps' record for most individual medals won at the World Championships.

Tomorrow's 50m freestyle final offers a chance to move within one.

Mélanie Henique of France returned to the podium at the World Championships 11 years after her bronze in the women's 50m butterfly in Shanghai, securing second place in 25.31.

Individual successes continued to be a theme of the day, with Hungarian home favourite Kristóf Milák following in the footsteps of only Phelps and South Africa's Chad Le Clos in winning men's 100m and 200m butterfly gold at the World Championships.

The race was held without the United States' Olympic and back-to-back world champion Caeleb Dressel, who has withdrawn from the Championships on medical grounds.

Milák followed up his world record-breaking 200m performance by triumphing in 50.14, adding to his 100m silver at Tokyo 2020 and at the World Championships in Budapest in 2017.

Japan's Naoki Mizunuma placed second in 50.94, followed by Canada's Joshua Liendo Edwards with a time of 50.97.

There was drama in the women's 200m backstroke final, where Phoebe Bacon of the US had been the top performer in the heats and the semi-finals, and led for much of the race.

However, she was denied a maiden world title by just 0.04 by Australia's Olympic champion Kaylee McKeown, whose final split of 31.70 propelled her to victory in a total time of 2:05.08.

The defending champion Regan White of the US came through in third in 2:06.96.

Benjamin Proud was the day's other individual winner.

He added to his short course world title in the men's 50m freestyle, winning Britain's first gold medal of the World Championships in 21.32.

Michael Andrew of the US was second in 21.41, with France's Maxime Grousset completing the podium in 21.57.

The seventh day of competition concluded with a world record, as Australia triumphed in the mixed 4x100m freestyle relay in 3:19.38.

Earlier in the day at the Széchy Outdoor Pool, China triumphed in the women's team free routine artistic swimming final with a huge score of 96.7000.

It was Wang Liuyi and Wang Qianyi's fourth gold medals in Budapest, following their success in the duet technical and free events, and China's victory in the team technical final.

Tomorrow is set to mark the final day of artistic swimming and swimming finals at the FINA World Championships before the beginning of diving and open water swimming competitions on Sunday (June 26).