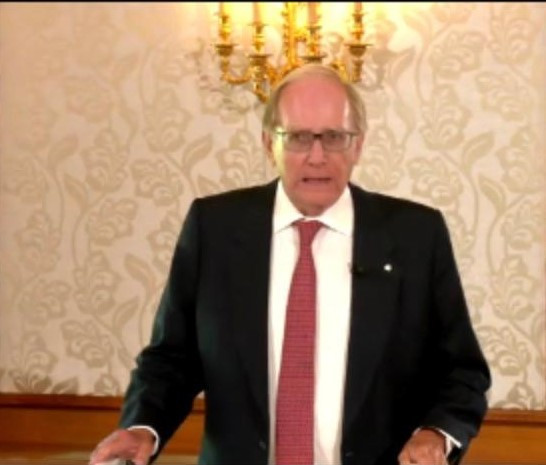 The world governing body was plunged into crisis, McLaren claimed, because of plans launched by the election of C K Wu as President of the International Amateur Boxing Association (AIBA), as it was then called, McLaren alleged in his report.

"The issues facing IBA today derive for the most part as a result of the expansive dreams that President C K Wu had about the organisation when he became President of AIBA in 2006," McLaren claimed in the third and final of his reports.

"This dream changed the scope of AIBA from its original objective of governing amateur boxing to growing their influence and governance over all forms of boxing at all levels worldwide.

"Based on this dream, and the money needed to finance it, he made the financial decisions that brought the organisation to a state of near insolvency by the time of his departure in 2017."

Wu’s controversial plan included the launch of the World Series of Boxing (WSB), an international tournament that allowed amateur boxers to compete professionally for city-based franchises while maintaining amateur status and Olympic eligibility.

It was organised by AIBA from 2010 to 2018 until the International Federation confirmed in 2019 that the league had ceased operations amid mounting financial losses.

The McLaren Report claimed that financing the WSB and Boxing Marketing Arm (BMA), the entity established to help administer and market the league, "brought AIBA to the verge of financial ruin."

The financial problems suffered by AIBA under Wu, a Taiwanese and long-serving member of the International Olympic Committee (IOC), helped foster a culture of corruption, including in refereeing and judging, it is alleged by McLaren.

A damning investigation into boxing at the 2016 Olympic Games in Rio de Janeiro published last September by McLaren, who exposed state sponsored doping in Russia, found widespread evidence of "corruption, bribery and the manipulation of sporting results."

The report by McLaren, claimed that the seeds of the corruption had been sown in the years beforehand, with bouts before and during London 2012 also under suspicion.

McLaren found that there existed a culture of "favours", particularly among the post-Soviet countries - with Azerbaijan giving AIBA an investment loan of $10 million (£8 million/€9.5 million), that was helped to keep afloat the WSB, with the expectation that bouts would be manipulated in their favour for medals at London 2012.

"More than a decade of financial mismanagement created a damaging legacy that hung over the management and administration of the sport until recently," McLaren concluded in his final report.

"The pursuit of investments for unrealistic business plans and the implementation of the ventures contributed to the improper management and administration of the sport and of the planned ventures.

"Corruption was allowed to creep in and take hold of the organisation because of the senior management’s excessive focus on finding investments for unrealistic ventures.

"Insufficient attention was paid to the administration of the sport and its officials.

"When those enterprises never materialised, the sport suffered a huge financial burden that nearly caused its collapse.

"The singular focus of management became finding funds to repay the loans and pay the staff.

"The combination of attrition and the lack of financial resources ultimately resulted in the organisation being left with a skeleton staff to run itself."

The IBA’s financial situation was a key factor in the International Olympic Committee’s (IOC) decision to suspend it as the Olympic governing body for boxing in June 2019, leading to them organising the tournament at the re-arranged Tokyo 2020 Olympics last year, and in leaving the sport off the initial programme for the 2028 Games in Los Angeles.

The election of Umar Kremlev in December 2020 has helped provide financial stability to IBA but his reliance on Russian state-owned utility company Gazprom was a source of friction between the governing body and the IOC even before Moscow ordered the invasion of Ukraine in February.

The IOC has claimed that the IBA's financial dependence on single sources of revenue from external investors was one of the reasons for its high level of debt, which at one point had reportedly reached at least $16 million (£13 million/€15 million).

Kremlev has claimed that IBA is now debt-free as a result of its sponsorship deal with Gazprom.

"At the time of writing this Report, the catastrophic state of AIBA finances described above is now a legacy of the Wu Presidency," the McLaren Report said.

"The financial input by Gazprom put an end to the jeopardy that AIBA put itself in and saved it from financial collapse.

"Whatever the debate of the source of the funds, it has ensured the continuing survival of the IBA."

The position of Kremlev, one of two Russians currently President of an Olympic sport, is not investigated by McLaren.

The IBA had commissioned the report from McLaren.

Kremlev was re-elected for a full term as IBA President at the election in Istanbul last month, but the process faces having to be re-run after his only rival, Boris van der Vorst, President of the Dutch Boxing Federation, was ruled ineligible on the eve of vote.

Van der Vorst subsequently appealed to the Court of Arbitration for Sport who ruled that he had been unfairly barred.

Kremlev has called for the election to be held again but, in the meantime, has promised to implement the recommendations contained within the report published by McLaren.

"I am grateful to Professor McLaren and his team for the pivotal role they have played in the process of reforming boxing," he said.

"IBA is going to work on the implementation of his recommendations based on the principles of transparency and integrity.

"We are committed to making our sport clean and changing the overall culture that lead to the crisis that plagued our sport.

"We all know that the image of IBA was damaged due to the mismanagement of the organisation and years of wrongdoings, corruption, and biased judgment.

"Our task is to restore it and build a trustworthy organisation that takes care of its athletes and coaches as a first priority.

"Change of culture doesn’t happen overnight, but we are doing our utmost to ensure that proper education for our officials will lead to the highest standard of officiating at our events."

To read the full report by Richard McLaren click here.