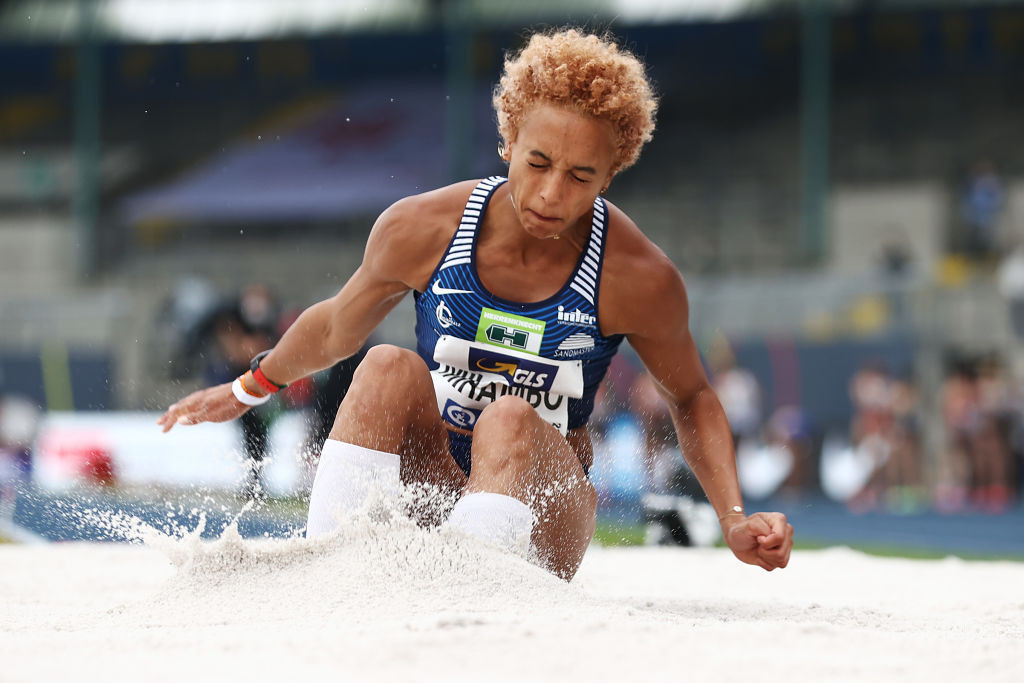 Huge victories in the field for Germany’s Malaika Mihambo and Kristjan Ceh of Slovenia, and impressive wins on the track from home athletes Dina Asher-Smith, Keely Hodgkinson and Laura Muir were highlights of a blustery afternoon’s athletics at Birmingham’s re-built Alexander Stadium today.

With the arena staging its first big event - the second meeting of this season’s Wanda Diamond League meetings - ahead of this summer’s Commonwealth Games the level of expectation was high, and the afternoon saw six performances that topped this season’s world lists.

Mihambo, Germany’s world and Olympic long jump champion, shattered a world class field with a winning mark of 7.09 metres, the best seen this year, and rounded off with 7.03m, with silver going to Ukraine’s Maryna Bekh-Romanchuk on 6.66m, a centimetre clear of Britain’s Lorraine Ugen.

Ceh, fifth at the Tokyo 2020 Games, produced a massive national and Diamond League record of 71.27m, improving on his previous mark of 68.75m, to defeat Sweden’s world and Olympic champion Daniel Stahl of Sweden, who finished third on 65.97m behind Lithuania’s 2017 world champion Andrius Gudzius, who threw 66.40m.

The 23-year-old Slovenian, who competes wearing glasses, thus moved to tenth on the all-time list.

Fellow Briton Darryl Neita also underlined her ambitions of earning a Commonwealth medal in the same stadium later this summer as she finished strongly to take third place in 11.14.

"I’m very happy to win against such a strong field and in this kind of weather," Asher-Smith told BBC Sport.

The two Britons later joined Beth Dobbin and Imani Lansiquot in setting a 4x100m 2022 world lead time of 42.29 in an event outside the Diamond League framework.

While Asher-Smith’s ambitions at the Tokyo 2020 Games were undermined by injury, the same was not true for Hodgkinson and Muir, who took silver at the 800m and 1500m respectively, and both satisfied their own ambitions and the expectations of spectators in the high new stands by earning composed victories in their keynote events.

Hodgkinson, who took the long view earlier this year by pulling out of a World Indoor final that looked hers for the asking as a precaution after a muscle problem, won in relaxed yet determined fashion in the concluding Diamond League track event in 1min 58.63sec, pulling comfortably clear over the final 50 metres from France’s Renelle Lamote, who clocked 1:59.53, and Jamaica’s Natoya Goule, who finished in 2:00.13.

The 20-year-old from Atherton in Greater Manchester is now looking forward to next week’s Diamond League meeting at Hayward Field, Oregon, which will host this year’s World Championships.

Muir, obliged to miss the indoor season because of injury, had to push hard to ensure a winning start to her outdoor season over 1500m after coming from altitude training in St Moritz.

Once the pacemaker pulled away with 600 metres remaining the 29-year-old Scot was 10 metres clear of the field, tracked only by Jess Hull of Australia.

The two remained together, with the Australian smartly slipstreaming in the blustery conditions, until the start of the final straight when Muir, her face evidencing effort, moved a couple of metres clear in 4:02.81, with Hull clocking 4:03.42.

From start to finish. She went from the gun and did not look back! @keelyhodgkinson pleases the home crowd with a 1.58.63 to take the win 🥇#DiamondLeague #BirminghamDL 🇬🇧
📸 @Diamond_League pic.twitter.com/VgBIww6Xd2

There were three other world-list topping performances on the day.

Hansle Parchment, the 110 metres hurdles gold medallist at the Tokyo 2020 Games, won in 13.09sec after his fellow Jamaican and predecessor as Olympic champion, Omar McLeod, had whacked a hurdle, slipping to second place in 13.17.

Earlier the competition had proved an anti-climax for Britain’s Olympic bronze medallist Holly Bradshaw and Olympic champion Katie Nageotte of the United States, who failed at 4.45m.

Diamond League champion Francine Niyonsaba of Burundi was unable to take her place in the race as she experienced delays in securing a visa.

Kristjan Ceh, remember the name. He wins the men's discus with a sensational 71.27m. pic.twitter.com/AhCg1xn2SK

The men's 100m lost much of its competitive zest as the world indoor 60m champion, Trayvon Bromell of the United States, was disqualified for a false start, and was shortly joined by home talent Zharnel Hughes who did likewise as the field was recalled for second time.

Third time round, however, there was little to choose between the field as they ran into a slight headwind of -0.2 metres per second and, surprisingly, Aaron Brown of Canada, who had run 10.23sec finishing second in the earlier B race, won in 10.13 from Jamaica’s 2011 world champion Yohan Blake, who clocked 10.18.

Another expected home win was delivered in the men's 400m by European champion and West Midlands product Matthew Hudson-Smith in 45.32sec from Bryce Deadmon of the United States, who clocked 45.51.

Britain’s Olympic bronze medallist Josh Kerr, back from his base in the United States, was never able to get in touch with the lead, finishing fifth in 3:35.92.

Olympic champion Valarie Allman of the United States, who last month added 30 centimetres to her North American record with 71.46m, earned victory with 67.85m, but only just, as Croatia’s 31-year-old London 2012 and Rio 2016 gold medallist Sandra Perković offered evidence of her enduring, defiant competitiveness as she set a season’s best of 67.26m.

Grabarz, who retired in 2018, originally finished joint-third in London but has moved up the order following the retrospective ban for the original winner, Russia’s Ivan Ukhov, with the original silver medallist, Eric Kynard of the United States, inheriting the title.

"I was one of the fortunate ones to still get a podium moment at London 2012 so I don’t feel as though I lost out quite as much as some," said Grabarz, who shared bronze with current joint Olympic champion Mutaz Barshim of Qatar and Derek Drouin of Canada.