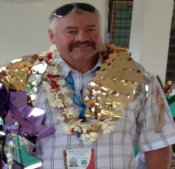 Lee will be entrusted with ensuring the tournament takes place in strict compliance with World Taekwondo's competition rules, and that judging is fair.

"I look forward to your continued devotion to the successful organization of the 2023 Pacific Games," World Taekwondo President Chungwon Choue wrote in the letter appointing Lee technical delegate.

Lee served as technical delegate for the taekwondo tournament at the 2019 Pacific Games in Apia in Samoa.

Lee faced no competition in the election.

Honiara, capital of the Solomon Islands, is due to stage the Pacific Games between November 19 and December 2 in 2023.

Taekwondo is one of the 23 sports set to be contested at the Pacific Games.