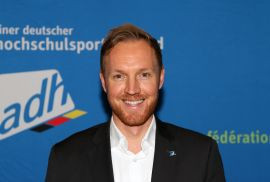 The Rhine-Ruhr 2025 FISU World University Games Advisory Board has met for the first time after it was set up by the Germany University Sports Federation (ADH).

The Advisory Board, whose first meeting took place in hybrid form, is designed to increase preparation for the Rhine-Ruhr 2025 FISU World University Games.

The next session will take place entirely online next month.

"Even in this technically demanding format, we were able to have a productive and profitable conference thanks to the excellent preparation of the ADH office," said Jan-Philipp Müller, an Advisory Board member.

"In addition to defining the self-image of the Advisory Board and determining work and communication processes, the next important steps were defined and the prerequisites for dealing with the main focuses were created.

"We will continue to coordinate this with the ADH membership in line with our self-image."

René Wolf controls the administration whilst ADH Board member Joshua Miethe is also on the Advisory Board.

The ADH also plans for an online format for the university members in the lead-up to the Perspective Conference in May.

As a part of this process, an opportunity will be given for members to exchange views on key topics within the framework of the forum studies.