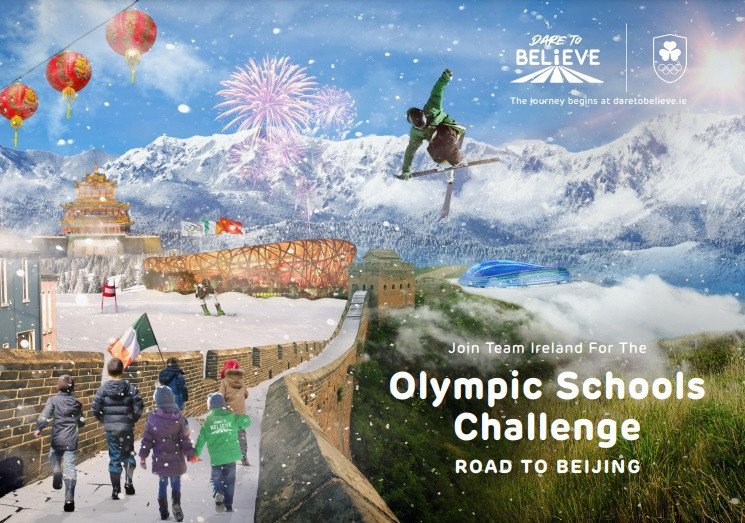 The Olympic Federation of Ireland has launched a free online school challenge to encourage children to get active and learn about Beijing 2022.

The scheme, called "Road to Beijing" is scheduled to run from February 4 to 20 - the duration of the Games in the Chinese capital.

Coinciding with the 30th anniversary of Ireland's first participation in the Winter Olympics, the programme sees youngsters take an virtual journey to China.

Schoolchildren can log their physical activity which can be converted to a distance on an interactive map that helps their team get to Beijing, passing 1924 and 1976 hosts Chamonix and Innsbruck respectively, en route, and unlocking videos and activities on the way.

Road to Beijing is part of the OFI’s "Dare to Believe" Programme and aims to introduce winter sports to Irish school children as well as teaching them about Ireland at the Olympics and celebrating Chinese culture.

The 10,000 kilometres challenge is modelled on last year’s Road to Tokyo which saw 55,000 school children get more active while also learning about the wider benefits of sport and the Japanese culture.

📢 REGISTER FOR THE WINTER OLYMPIC SCHOOLS CHALLENGE ROAD TO BEIJING! Join #TeamIreland on the #RoadtoBeijing with our interactive schools challenge ☘ https://t.co/gaj7DwNSxJ pic.twitter.com/5jDq1M3Vz8

"Inspired by the success and feedback from our Road to Tokyo challenge received, we were excited to recreate the magic and evolve our Olympic School Challenge website and curriculum to coincide with the Winter Olympics in Beijing," Róisín McGettigan-Dumas, the Dare to Believe programme creator.

"Students and teachers will be fascinated to learn about the life of Winter Olympians and be inspired to get active themselves by trying out the snow sport PE lessons and games.

"In addition, students will enjoy the variety of classroom cultural activities & crafts and we can’t wait to see their creations."

Irish Alpine skier Tess Arbez added: "I’m passionate about sports, and especially winter sports, and I’m really excited to see that school children around the country will be learning about our sports.

"Competing in Pyeongchang was a dream come true, and now there is an extra special feeling knowing that young people all around Ireland will be sharing my passion and backing me while we are competing.

"It will be a very special Games, and best of luck to everyone taking on the Road to Beijing."

Ireland made its Winter Olympics debut at Albertville 1992, missed Lillehammer 1994, but has competed in every Games since.

The closest they have come to a medal came at Salt Lake City 2002 when Clifton Wrottesley, an Eton College-educated British Lord, finished fourth in the skeleton, missing the bronze by just 0.42 seconds.

Their best performance came from Tess Arbez, who finished 46th in the women's slalom.