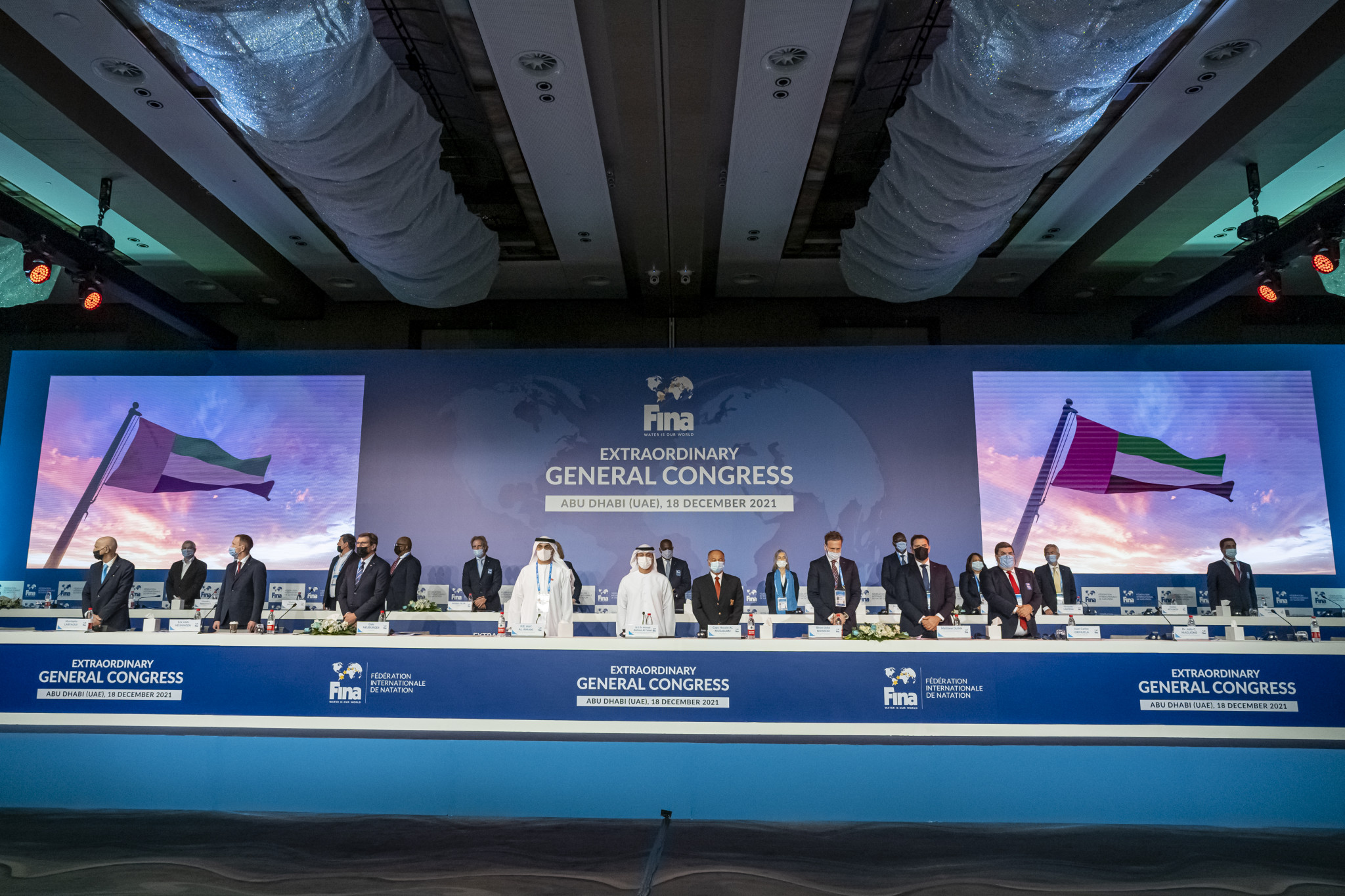 The International Swimming Federation (FINA) is heralding a "new era" for aquatics sport after members agreed a series of reforms at the organisation’s Extraordinary General Congress here in Abu Dhabi.

Al-Musallam’s comments came in an impassioned speech where he implored FINA members to back the proposals in a bid to "send a clear signal to the world that FINA is serious about reforms and has entered a new era".

An overwhelming majority of members inside the Congress Hall at the Hilton Hotel situated on Yas Island raised their green bats in favour of the changes, while those participating remotely submitted mail votes.

FINA has confirmed that 256 members agreed to the reforms with two abstentions.

Governance, marketing, event manipulation, digital communications and safeguarding are the areas that are now set to be overhauled by FINA.

Central to the reforms is the formation of an Aquatics Integrity Unit (AIU) as FINA looks to align with other major International Federations.

FINA’s Doping Panel is also set to be scrapped with the Court of Arbitration for Sport Anti-Doping Division enlisted to adjudicate on anti-doping violations.

Al-Musallam conceded current governance at FINA was "totally inadequate" and said they needed to improve the way they handled potential anti-doping rule breaches.

"We have been rightly criticised for a lack of transparency and directness," said Al-Musallam.

"It can never be right for a federation to act both as a judge and jury, athletes have little confidence in our process on vital topics, like anti-doping and ethics.

"An introduction of an Aquatics Integrity Unit is at the heart of our reforms.

"It is this unit that will be entirely independent of the FINA Bureau that will investigate potential violations of FINA anti-doping rules, look at allegations of event manipulation and provide a proper reporting system.

"There will be a new Code of Ethics and our Constitution will be amended to reflect a greater need for balanced power between FINA and its members and athletes at National Federations."

Al-Musallam has also vowed to improve FINA’s diversity after highlighting that only 15 per cent of the ruling Bureau are women.

"This is completely inadequate," he added.

"I give my firm backing to the reforms to our Constitution that will give more women a seat at our top table.

"These reforms are essential to modernising FINA, but they are just the beginning.

"There is so much more to be done."

The group, led by FINA's legal counsel François Carrard, a former director general of the International Olympic Committee, presented a report in October that raised concerns over FINA's integrity and independence, possible conflicts of interest in anti-doping, and the marketing and promotion of the sport.

"In June, you gave me the honour of electing me to be your President," said Al-Musallam.

"I stood in front of you in Doha and promised that I would deliver a programme of essential reforms that would bring aquatics sport into the 21st century.

"Today is the day that I deliver that promise.

"Today is the day that we can confirm those reforms.

"Today is the day that we can look at each other and proudly say that FINA has listened and changed.

"Today is the day that we can confirm that our athletes are at the heart of what we do and what we stand for.

"We are a team, we are always so much stronger when we work together.

"We need to send a clear signal to the world that FINA is serious about reform and it has entered a new era."

Marco Troll, President of the German Swimming Federation, was among the representatives of member associations present at the meeting to back the Reform Committee’s recommendations.

"It is a very important step in FINA's history," said Troll.

Any amendments to the FINA Code of Ethics are not expected to come into force until June 2022 when the organisation stages its next Congress in Fukuoka in Japan.

Members of the Aquatics Integrity Unit are also due to be elected at the meeting in the Japanese city.

"Reform is a process that will test our patience," added FINA executive director Brent Nowicki.

"Change will not happen overnight but I have no doubt that we will be successful."

The Extraordinary General Congress was held on the third day of the World Swimming Championships (25m) which is scheduled to run until December 21 in Abu Dhabi.