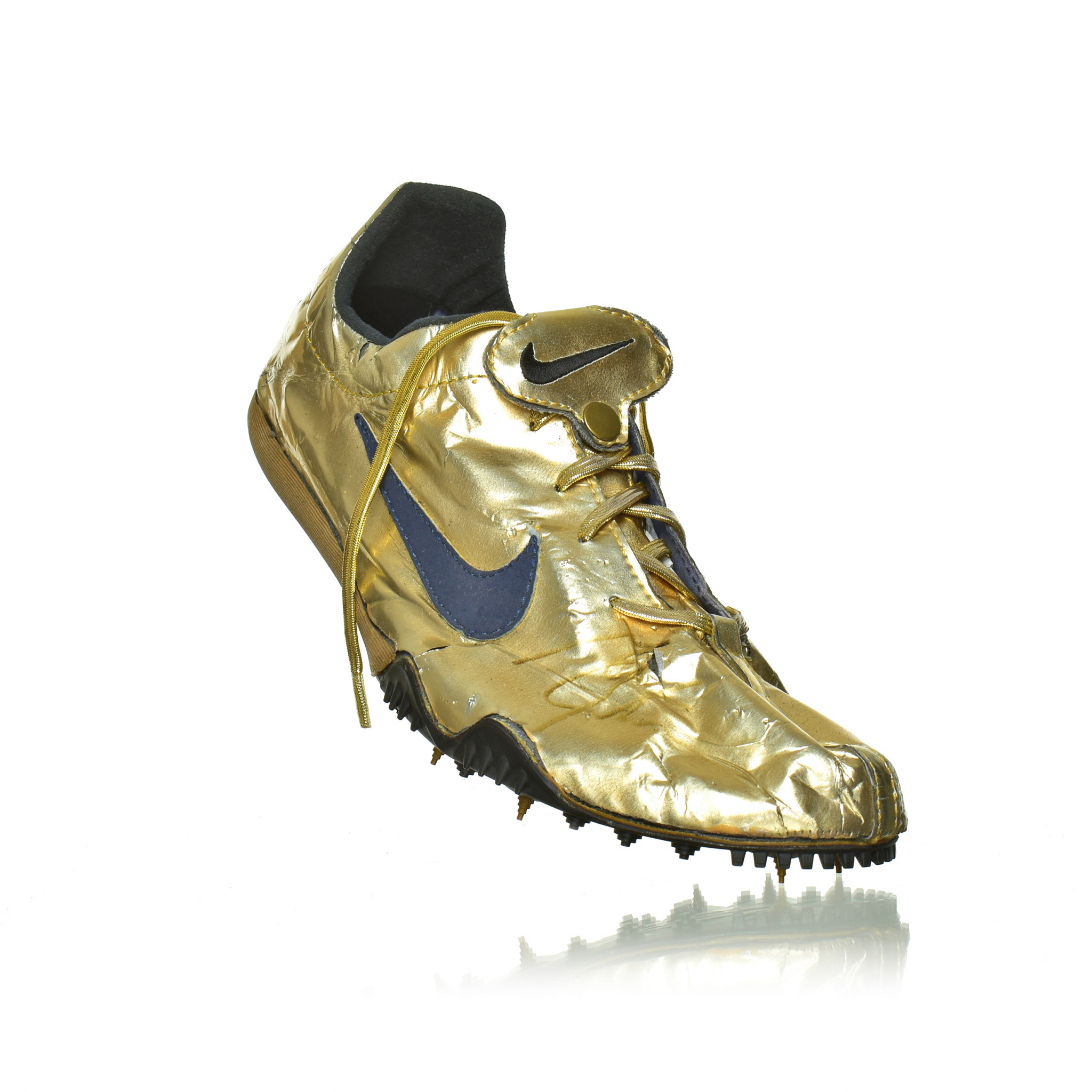 Three iconic golden running spikes worn by former world 200 and 400 metres record holder Michael Johnson are the prize item in the latest batch of acquisitions for the Museum of World Athletics (MOWA).

To mark this week’s 226th World Athletics Council meeting in Monaco, a special heritage display was staged in which the items worn by "The Man with the Golden Shoes", who set eight world records and won four Olympic titles, took pride of place.

One of the three autographed shoes, specially designed by Nike, is from the 1996 Atlanta Games, where Johnson became the first man to complete the 200-400m Olympic double.

One of the shoes he wore while collecting his fourth Olympic gold in the Sydney 2000 Games, where he won the 400m at the age of 33, a year after setting a world record of 43.18 at the Seville World Championships.

The trio of custom-designed shoes made with the ground-breaking thermoplastic Zytel now form part of the World Athletics Heritage Collection thanks to the generosity of Brad Hunt, who was Johnson’s agent during his outstanding running career.

In 2001, Johnson undertook his Golden Victory Lap tour, finishing his career at the Goodwill Games in Brisbane, and it is one of the shoes he wore there that completes this trio of items.

The three spikes will soon be on display in three-dimension in the virtual MOWA, which can be viewed here.

In 2022, the spikes will also go on public show at MOWA’s onsite public exhibitions in Portland and Oregon.

"Both Olympic shoes were given to me two-to-three weeks following the Games they were used," Hunt said.

"I can still vividly remember the chills I felt when I became the first person Michael told of his decision to wear gold spikes in the 1996 Olympic Games.

"Michael had just set his first world record of 19.66 the day before and we were discussing how much attention his purple spikes had received when he declared he would be wearing gold in the Games.

"Although the 2000 shoe is made with actual 14 carat gold in the material, thus making them shinier, the 1996 shoe is my favourite because these Gold Shoes were an actual media phenomenon!

"The amount of secrecy involved with the shoes' clandestine development and historical Olympic debut created one of the strongest identities an athlete has ever had with his or her footwear."

Hunt added: "I visited the Heritage Exhibition while at the 2019 World Athletics Championships in Doha.

"The scale of the collection was particularly impressive considering it had only been created in 2018.

"The historic display of artefacts included items from the careers of Jesse Owens, Carl Lewis and Usain Bolt.

"In men’s sprinting history there was one glaring omission.

"By offering the spikes which Michael gave me after some of his most memorable races, I hope to have helped fill that gap in the World Athletics Heritage Collection."