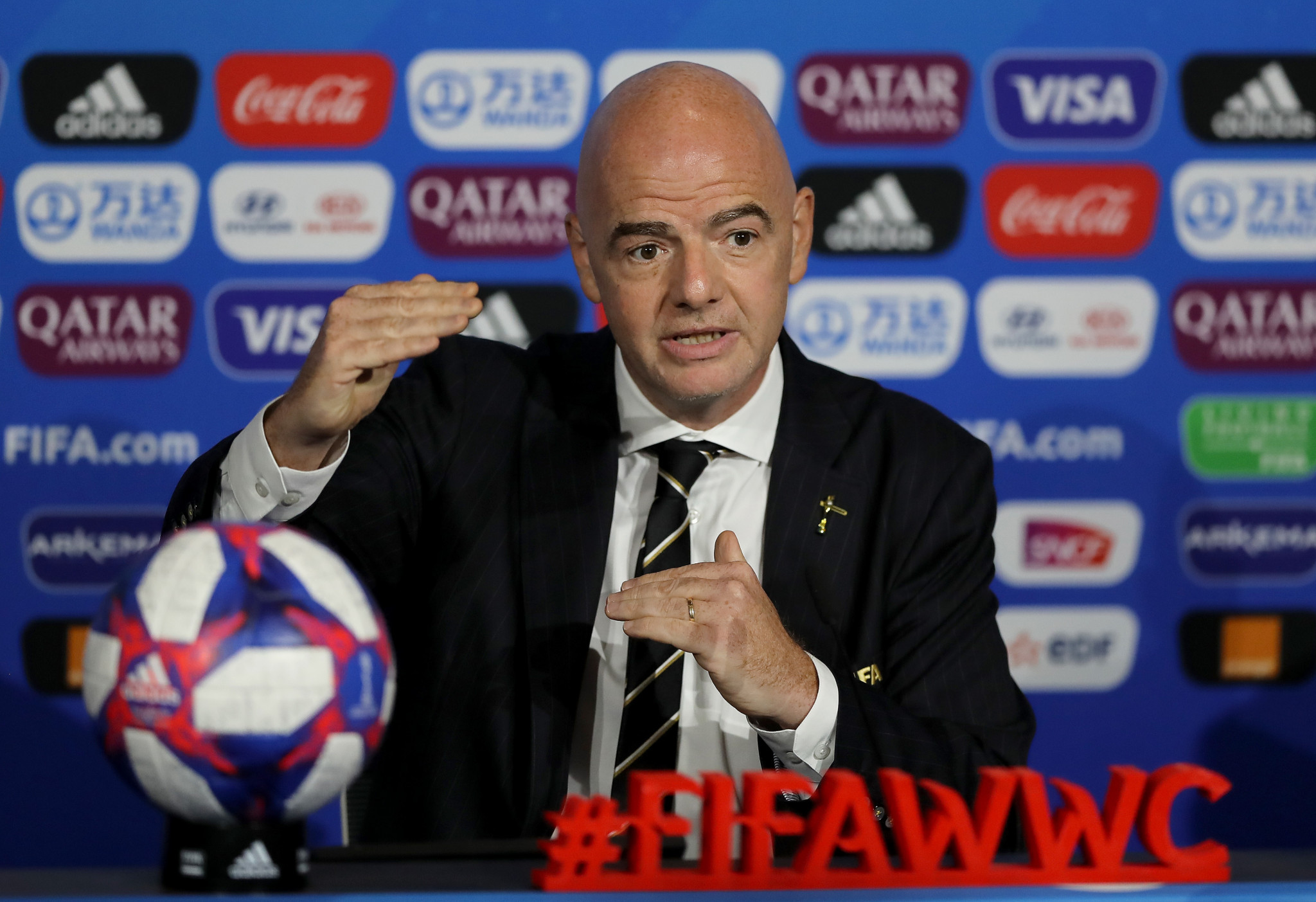 Infantino made the statement as tournament organisers celebrate the one-year countdown to the World Cup, providing an update on preparations for the event, which is due to start exactly one year today.

Staging the event in Qatar has led to criticism with reports of human rights abuses linked to the construction of venues.

Countries have been urged to boycott the World Cup by campaigners due to the treatment of migrant workers.

But Infantino said he had been encouraged by the work that has gone in Qatar to improve conditions.

"We will enjoy being all together in one place," said Infantino.

"Fans will be treated to top-class football in eight state-of-the-art stadiums.

"We are looking forward to the opportunity to bring people from different backgrounds together.

"What I see here is a country that is preparing to welcome the whole world, and every fan, but also looking into where improvements are needed and taking real steps to do so in many different areas, particularly in relation to human rights and workers’ welfare."

🏆 There's one year to go to the #WorldCup!

Qatar 2022 has also issued a report at the one-year-to-go milestone which underlines its responsibility to "ensure that human rights are respected in all activities associated with its operations".

It claims the World Cup has made a "significant contribution to improved labour conditions" in Qatar courtesy of the Workers' Welfare programme put in place by the Supreme Committee for Delivery and Legacy, which is responsible for delivering tournament infrastructure.

"The robustness of this programme has repeatedly been recognised by experts and trade unions over the years, and as stated in a recent UN report, it has brought about 'impressive changes' and 'sweeping reforms' within the host country," the statement from Qatar 2022 read.

"These measures have also seen improvements for workers who are not directly involved in the delivery of the FIFA World Cup."

Organisers insist there had been a "major collective effort" from local authorities and the International Labour Organization to achieve wider legislative change in workers' rights.

Among the changes include a "region-first permanent minimum wage" and the scrapping of "no objection certificates", signalling the end of the kafala system which forces migrant workers to ask their employer for permission to change jobs or leave the country.

"As always, when it comes to major labour reforms, there is still work to be done for those changes to be fully implemented across the labour market, but the reforms have already benefitted hundreds of thousands of workers in Qatar and significant progress has been achieved in a very short period of time thanks to the commitment of the highest authorities in the country," the statement from Qatar 2022 read.

"FIFA, together with its counterparts in Qatar, continues to implement and further expand the well-recognised systems to protect workers involved in FIFA World Cup preparations and delivery, including through a thorough audit and compliance regime with companies involved in FIFA World Cup-related activities and an increasing focus towards the service sector as the tournament fast approaches.

"FIFA will continue to push for greater protection of workers and promote the implementation of wider labour reforms in Qatar through constructive dialogue with the Qatari authorities and joint efforts with other stakeholders.

"FIFA has no doubt that the event will leave a lasting legacy and will serve as a catalyst for broader positive social change in the host country and across the region."

Earlier this year, Amnesty International issued a letter to Infantino, urging FIFA to take "urgent and concrete action" and "use the full extent of its influence" to ensure Qatari authorities fulfil a programme of labour reforms prior to next year’s World Cup.

The human rights organisation claimed its research had shown that thousands of migrant workers are still exploited and abused.

A total of 13 of the 32 teams have been confirmed for next year’s World Cup as qualification continues.

Qatar 2022 said preparations were "well on track", with seven of the eight stadiums hoped to be inaugurated by the end of 2021.

The Lusail Stadium - the venue for the final - is set to open its doors early next year.

Tickets have yet to be released, but Qatar 2022 confirmed more than 82,500 hospitality packages have already been sold to guests from more than 60 countries.

It claimed hospitality sales were up by more than 500 per cent, and 48 per cent of the total number of packages sold for 2018 have already been booked.

Qatar 2022 said it was committed to using "every available accommodation option" in the country to deliver a "sustainable" World Cup.,

Up to 130,000 rooms are set to be made available for the more than one million fans expected to descend upon the Middle East country during the 28-day tournament.