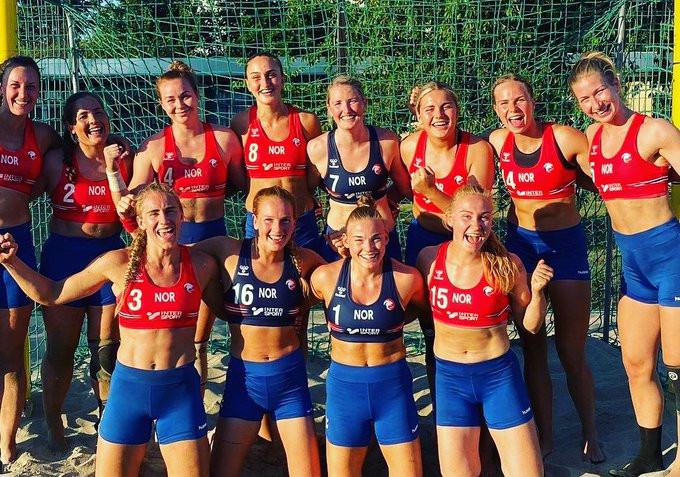 The International Handball Federation (IHF) has updated the uniform rules for the beach handball discipline, which now require female athletes to wear "short tight pants with a close fit."

Regulations had previously required women players to wear bikini bottoms "not more than 10 centimetres on the sides".

The change follows widespread criticism over the €1,500 (£1,270/$1,740) issued after Norway's players wore shorts instead of bikini bottoms during the bronze medal match against Spain at the Women's European Beach Handball Championship in July.

Norway's then-Minister for Culture Abid Raja branded the fine "completely ridiculous," and called for attitudes in the governance of the sport to change.

The Norwegian Handball Federation said it was "very proud" of its team and planned to pay the fine on its players behalf, an offer also made by American pop star Pink.

The European Handball Federation had claimed that the controversy was "based on disinformation on the procedure".

The IHF has now updated its Rules of the Game for Beach Handball, changes including graphics of permitted uniform for men and women.

Under the current rules, women players "must wear short tight pants with a close fit that are in accordance with the graphics," which include the stipulation that they must have a "maximum length to mid-thigh."

For men's shorts in contrast, athletes are required to wear shorts at least 10cm above the knee "if not too baggy".

All team members need to wear "identical shorts," and team officials "must submit their own team's uniforms for approval during the pre-competition TM [Technical Meeting]."

The rules also cover tops worn by athletes - men are required to wear "tank tops," while for women "body fit tank tops" are listed, both of which "must be sleeveless and close fitting."

In "severe weather conditions," players are allowed to wear "tight shirt, long tight pants (down to the ankle and not to the knees)" uniforms at the discretion of the Competition Management.

There has been an increased emphasis on challenging women's dress codes in sport, with campaigners criticising the regulations across several sports as outdated, restrictive and sexist.

Insidethegames has approached the IHF for a comment on its rule changes.