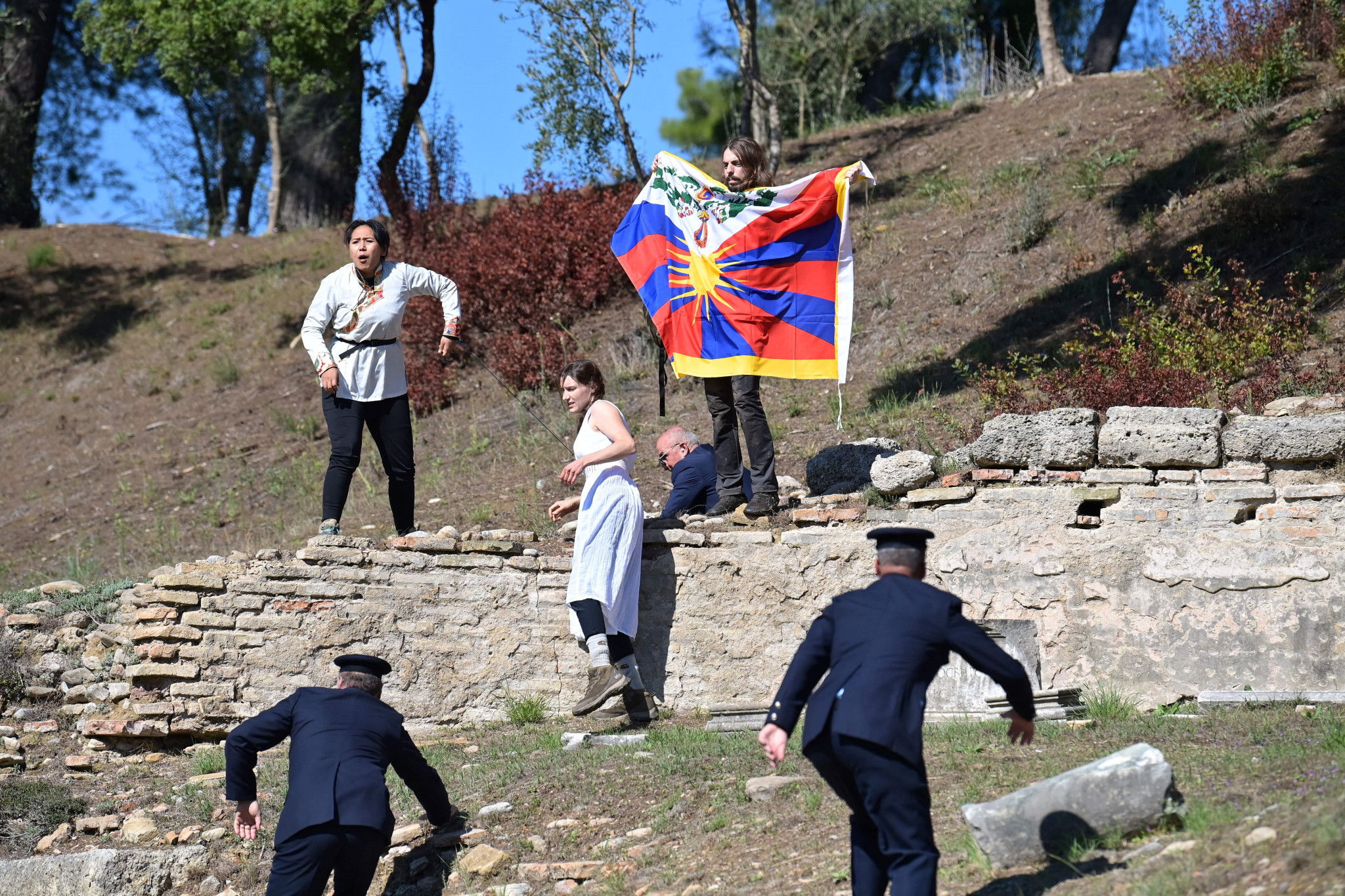 The Beijing 2022 Olympic Flame is now heading to Athens, but the Lighting Ceremony here was interrupted by protests over China's human rights record.

Four protesters with Tibetan flags were arrested outside the site early in the morning before the event.

Then, during the Ceremony itself, another small group comprising two women and a man entered the archaeological ruins and unfurled Tibetan flags and shouted slogans which were heard on the live television coverage of the event but not seen on the broadcast.

They also unfurled banners with the message "NO GENOCIDE GAMES".

This was in reference to Chinese Government policy towards Uyghur Muslims and other minorities.

They were quickly arrested by police.

Two human rights activists had protested in Athens yesterday and were arrested.

They had unfurled a Tibetan flag and hung a banner reading "Free Hong Kong - Revolution" from the Acropolis monument.

"How can China host the 2022 Olympics when they’re carrying out an unprecedented campaign of repression in Tibet, southern Mongolia, bullying Taiwan, destroying Hong Kong democracy, and committing a genocide against the Uyghurs," said Lhamo.

My homeland, Tibet is an information blackout and the CCP (Chinese Communist Party) is trying to eliminate our identities, so much that it was ranked the least free place tied with Syria.

"We’re calling on the sponsors, the broadcasters, the International Governments to not be complicit in genocide and to boycott Beijing 2022."

Free Tibet also provided details of the event that allegedly happened before the Ceremony began.

"Earlier, four more Tibetan activists sitting in a car on a public road near the entrance to the Ceremony were arrested by Greek police in unmarked cars - it is unclear what laws they had supposedly broken," the group said in a statement sent to insidethegames.

"China being awarded a second Olympic Games is particularly upsetting for Tibetans, whose protests against more than half a century of Chinese occupation ahead of the 2008 Beijing Olympics were met with a brutal crackdown that has led to Tibet being called the least free country in the world.

"Tibetans now live in a world of constant surveillance, where their land, culture and religion are all under threat from the Chinese Government."

"The lighting of the Olympic Flame represents 3,000 years of Greek history and a commitment to peace and dialogue," the HOC said in a statement.

"While the HOC respects individual rights to freedom of expression, it is disappointing that this traditional cultural event has been used by a few individuals for other purposes."

The event in Ancient Olympia carried on as planned, despite the disruption.

International Olympic Committee President Thomas Bach had earlier told the Ceremony: "In our fragile world, where division, conflict and mistrust are on the rise, the Olympic Games always builds bridges.

Bach, who had signed a document calling for an Olympic Truce the previous evening in Olympia, insisted: "This peace mission, handed down to us since ancient times, requires that the Olympic Games be respected as politically neutral ground.

"Only this political neutrality ensures that the Olympic Games can stand above and beyond the political differences that existed in ancient times, as well as today."

Only specially invited guests, including Greek President Katerina Sakellaropoulou and Beijing 2022 Organising Committee members, were allowed inside the Temple of Hera to witness the moment when the Flame was lit.

As the High Priestess, played by Greek actress Xanthi Georgiou, lit the Flame directly from the rays of the sun, the protesters shouted their slogans before police hustled them away without affecting the progress of the Ceremony.

It is thought that the protesters, thought to number three or four, may have infiltrated the site by climbing over a fence.

Guests and other visitors to the Ceremony, including members of the media, were subjected to two baggage searches and magnetic screening checks before they were allowed to enter.

Even though the Flame did not pass through the village of Olympia, the police presence on the main street was appreciably larger than what was the case for Tokyo 2020 or previous Torch Relays.

The Flame itself was taken straight to Athens after a symbolic Relay along a heavily guarded road above the archaeological site.

Police also patrolled the perimeter of the Ancient Stadium as the first runner, skier Ioannis Antoniou, carried the Flame to the monument to Baron Pierre de Coubertin.

He then passed the Flame to Chinese short track speed skater Li Jiajun, a five-time Olympic medallist who won silvers at Nagano 1998 and Salt Lake City 2002.

It is highly unusual for the Flame not to spend a week making a journey around Athens.

Organisers claimed this was as a result of COVID-19 precautions, a rationale which also prompted the decision not to allow spectators at the Ceremony in the Ancient Stadium.

The Handover Ceremony at the Panathenaic Stadium in Athens tomorrow will also be held behind closed doors, with only invited guests permitted to attend.

This will mark the formal handover of the Flame to Beijing 2022, and more protests are expected.

China's freestyle skier Li Nina, a four-time Olympian and winner of aerials silver medals at both Turin 2006 and Vancouver 2010, is set to be a Torchbearer in the stadium.

The cauldron will then be lit by Greek Nordic skier Paraskevi Ladopoulou, who is hoping to compete at Beijing 2022.

The Flame is due to arrive in China on Wednesday (October 20).

After a special welcome ceremony, it is due be displayed at Beijing Olympic Tower and then taken on an "Exhibition Tour".

An announcement has not yet been made about the itinerary of the domestic Torch Relay.