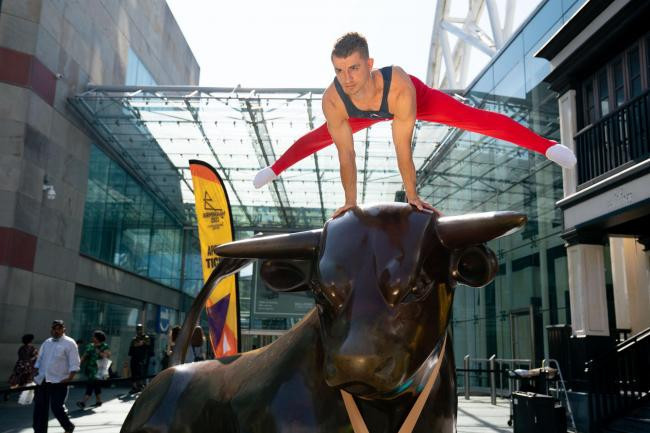 The main ticket ballot for next year's Commonwealth Games in Birmingham opens today, with more than a million available, and gymnast Max Whitlock is relishing the thought of fans being allowed back into stadiums for the event.

Organisers of the Games have revealed they are confident that there will be maximum-capacity crowds at venues in the West Midlands for the event due to open on July 28 and conclude on August 8.

This is irrespective of whether so-called COVID-19 passports will be in use in July and August next year.

"We've missed it massively and I think it's about time that we can get that back and get people back to enjoying sport.

"Sport brings people together, brings passion out of people, and starts conversations.

"I think it's massively important and I can't wait."

England's Whitlock is a 10-time Commonwealth Games medallist, and has won four golds - three at Glasgow 2014 and one at Gold Coast 2018.

Birmingham is set to become the third English city to host the event, after London in 1934 and Manchester in 2002.

A ticket ballot for local residents was launched in July, with a reported 850,000 applications already made, and now the rest of the country can attempt to secure tickets.

Any event provides a spike in interest and the Commonwealth Games can rejuvenate the public's attraction to sport after the coronavirus pandemic suddenly halted much activity in England, Whitlock hopes.

"But being able to inspire people is one thing that comes out of home competitions every single time which is incredible.

"I feel very fortunate that we can have another one with the Commonwealth Games coming next year really close to home in Birmingham.

"We're very lucky which is why we need to make the most of this opportunity."

The 28-year-old became the most successful worker of the pommel horse in Olympic history after he won the gold medal at Tokyo 2020 - a second gold on the apparatus and third medal in all.

However, he had to experience the historic moment in an empty arena due to a ban on fans because of the pandemic.

"It was a huge shame if I'm really honest, it was, but it was still okay," Whitlock said.

"It didn't make it a bad experience; it was still an incredible moment.

"With what I had achieved I still managed to enjoy it but there's no doubt that I missed having the crowds there."

Despite his incredible record on the apparatus, Whitlock has never won pommel horse gold at the Commonwealth Games after finishing runner-up in each of the last three editions.

"Since Tokyo, I've not been in the gym yet, it's important to give myself a long break, time to reflect and just chill for a bit," added Whitlock, also confirmed to insidethegames that he will not compete at the World Championships in Kitakyushu in Japan next month.

"When I gradually go back into training, I'll definitely chat to Scott [Hann], my coach, and then we'll re-plan again, and we'll go ahead.

"The minute you stand still is the minute people catch you."

Applications must be submitted by 8pm on September 30.

Applications are limited to one per household and ticket limits for sessions will apply.

At the end of the ballot window, tickets will be allocated at random.

Tickets for the Games start at £8 ($11/€9) for children and £15 ($21/€17) for adults and applicants will find out in October if they have been successful in securing tickets.