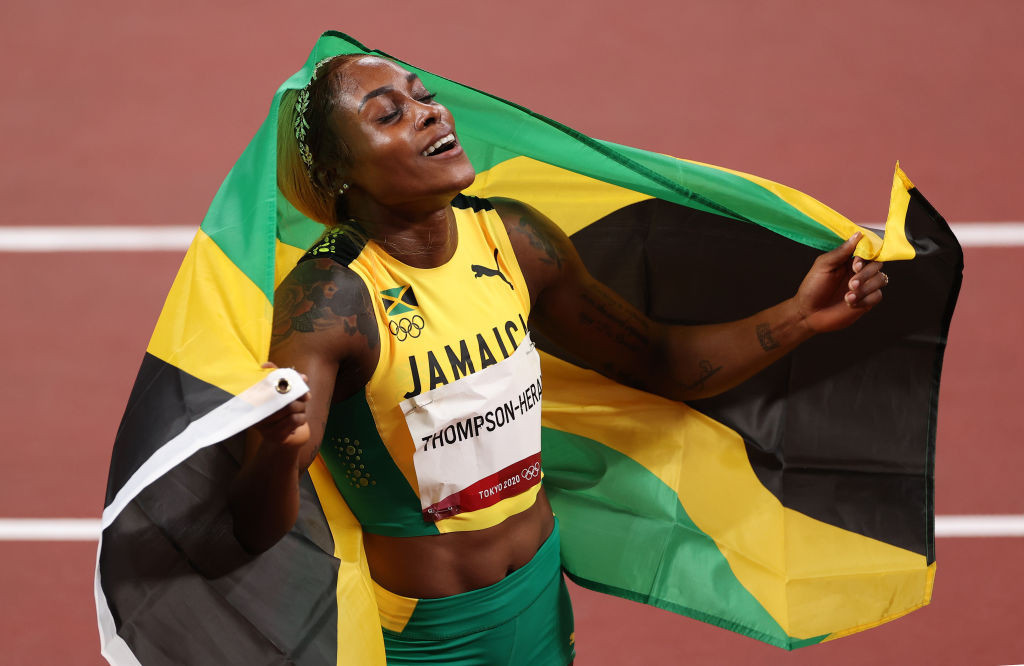 Her run puts her second on the all-time list behind Florence Griffith-Joyner, who set the world record of 10.49 in 1988.

Thompson-Herah's 34-year-old compatriot Shelly-Ann Fraser-Pryce, who was seeking a third Olympic 100m title, had to settle for silver in 10.74 after being overhauled in the final third of the race by her taller opponent.

Fraser-Pryce, who ran 10.63 earlier this season, is now down to third on the all-time list.

Shericka Jackson completed the Jamaican sweep in a personal best of 10.76.

Marie-Jose Ta Lou of the Ivory Coast was fourth on 10.91.

Thompson-Herah took over the lead at the 70 metres in the 100m final, finding time before she finished to point in wild excitement at the digital clock before capering away beyond the line.

Asked about her reactions approaching the finish line, Thompson-Herah commented: “I didn't see the time but the pointing was just, I knew I had won so, I don’t know what it means other than to show I was clear (of the field).

“I could have gone faster if I wasn’t pointing and celebrating early.

“But that shows there is more in store so hopefully one day I can unleash that time.”

Fraser-Pryce, who won 100m bronze at the Rio 2016 Games after successive golds, commented on earning a medal of a different colour:

“Of course you are disappointed, you know.

“The aim of an athlete lining up, of course, is always to win but that didn’t happen tonight.

"But I am still very grateful to make the finals and to be able to stand at the podium at my fourth Olympic Games.

“Putting it in perspective, I am really grateful for the opportunity that I had tonight.

“I am really excited that female sprinting is going to another level, you know, and that is truly remarkable, it speaks to the depth that we have in terms of females.”

Britain’s world 200m champion Dina Asher-Smith failed to reach the final after clocking 11.05 in the semi-finals that started the evening session on the track.

She pulled out of the 200m event after the semi-final, announcing she had suffered a serious hamstring rupture and had only been able to compete in Tokyo after emergency specialist treatment in Germany.

Earlier in the evening on day two of the Tokyo 2020 athletics programme, Daniel Stahl of Sweden added the Olympic men’s discus title to the world gold he won two years ago in Doha with a leading throw of 68.90 metres.

Austrian Lukas Wiesshaidinger had had to settle for bronze with a best of 67.07m, while Stahl’s compatriot and training partner Simon Pettersson won the silver medal.

The Swede is the first field event gold medallist of the Tokyo Games, and he lumbered out mightily with his fellow Swede to grab big yellow and blue flags to wave around.

"There was a lot of hard work and fun on the way.

"I am extremely proud."

Referencing the silver medallist, he added: "My training partner Simon Pettersson has been working hard.

"We have had a lot of fun together for many years.

"I am very proud of my coach too for believing in us and having faith.

"Sweden had different rules in early 2020 and so we have been training as usual, but keeping distance.

“We have been lucky.

"We have been kicking ass."

Poland earned the first ever mixed 4x400 metres relay gold in an Olympic record - no surprise there - of 3min 09.87sec.

The Dominican Republic nicked silver from the United States on the line.

Kajetan Duszynski, who brought the baton home for Poland to become the first Olympic mixed 4x400 metres champions, said: "I can't believe it.

"It is a dream since childhood.

"It has come true.

"It's such a great feeling."