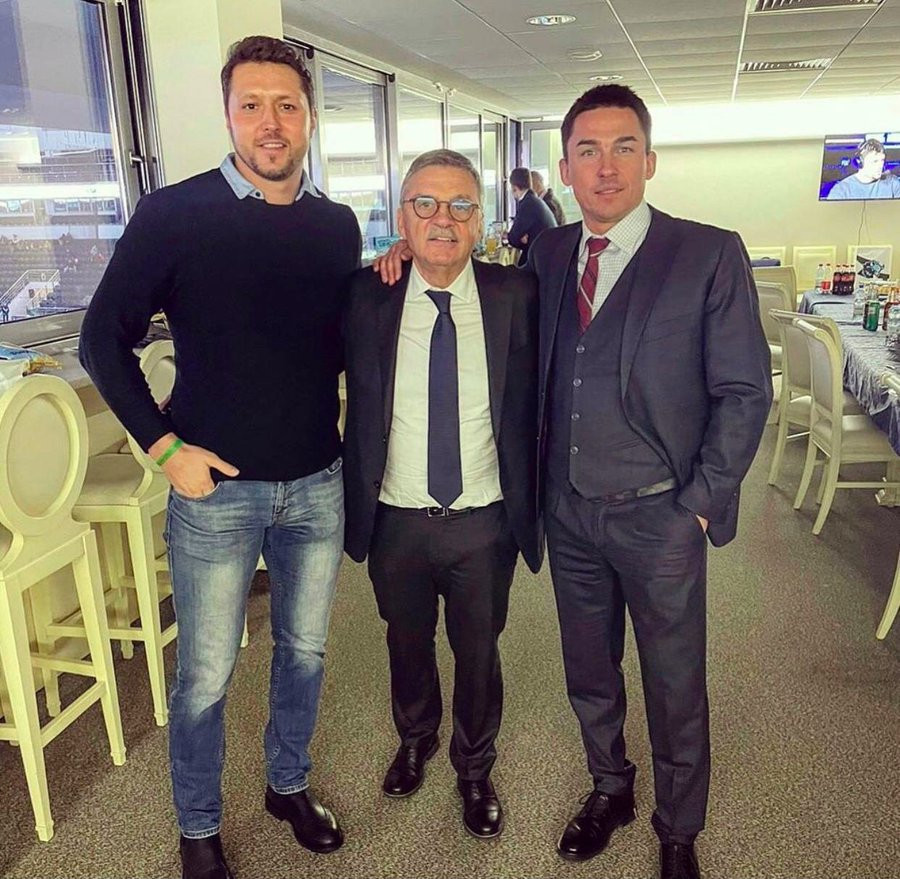 International Ice Hockey Federation (IIHF) President René Fasel has been pictured with the Belarusian Ice Hockey Association President Dmitry Baskov, who the world governing body are supposed to be investigating for his role in an alleged murder, at a Kontinental Hockey League in Minsk.

Fasel and Baskov were pictured together at Dynamo Minsk's match with Metallurg Magnitogorsk in the Kontinental Hockey League during a visit to Minsk to discuss Belarus' scheduled co-hosting of this year's Men's World Championships.

The European Union has led the condemnation of Bandarenka's death, describing it as an "outrageous and shameful result of the actions by the Belarusian authorities".

Last month Fasel confirmed in a letter that an IIHF Disciplinary Committee investigation had been launched into the activities of Baskov, also a Board member of the National Olympic Committee of the Republic of Belarus (NOCRB), for "potential violations" under article 6 of the IIHF's statutes.

In the photograph of Fasel and Baskov, shared by hockey player Artem Karkotsky, Fasel is wearing a facemask and is pictured standing up and waving while Baskov sits alongside him.

Another photograph shared by Belarusian politician Sviatlana Tsikhanouskaya shows Fasel and Baskov stood next to each other without a facemask.

insidethegames  has contacted the IIHF for a comment about the photos of Fasel and Baskov.

Earlier in the day Fasel claimed the organisation is taking a "balanced approach" over Minsk’s co-hosting of the Men’s World Championships after meeting Belarus President Alexander Lukashenko, a move which has been criticised by the Belarusian Sport Solidarity Foundation (BSSF).

Fasel last month confirmed the IIHF had opened an investigation into Baskov, who has been accused of involvement in the death of an opposition activist.

The meeting comes amid ongoing calls for Belarus to be stripped of its co-hosting right, following a violent crackdown on Government opponents and protesters after the disputed Belarusian Presidential election in August.

Lukashenko, who also heads the NOCRB, was re-elected President in elections dismissed as being neither free or fair by the European Union among other international observers.

Lukashenko, his son Viktor and Baskov were last month banned from attending next year's postponed Olympic Games in Tokyo, with three officials found by the International Olympic Committee to have "not appropriately protected the Belarusian athletes from political discrimination within the NOC, their member sports federations or the sports movement."

Despite the sanctions against the officials and calls for Belarus to lose its co-hosting rights, Fasel has claimed the meeting forms part of a "balanced approach" to addressing the issues around the World Championships.

"The situation today is different than it was in 2014 when we despite some resistance had a perfectly organised World Championship," Fasel said in a statement published by the IIHF.

"We were all there and can remember it well.

"The circumstances in Belarus have been different since last summer.

"We are here to address the situation and to find constructive solutions.

"As part of a careful evaluation of Minsk’s capability to co-host the World Championship, we are discussing the issues with different groups and are grateful for the possibility to meet with representatives of the Belarusian Government and the Organising Committee to hear their inputs to ensure a balanced approach.

"The process has started this morning and will be continued with more meetings in Minsk and with discussions within the IIHF Council."

Fasel last week said the organisation is in talks with countries which could replace Belarus as co-host for this year's Men's World Championship.

Today Rene Fasel @IIHFHockey president was photographed with Dzmitry Baskau, head of BIHA. By the way, last December Fasel confirmed that IIHF launched an investigation into Baskau, accused of involvement in the death of Raman Bandarenka. pic.twitter.com/ExZg4RPA0F

An IIHF Expert Group expressed "scepticism" over the reporting of COVID-19 cases in Belarus following a review into the situation.

This opened up a scenario whereby the IIHF could move the event from Belarus on health grounds.

Lukashenko has again claimed that Belarus will host the World Championships alone should Latvia refuse to co-host with the country, with the Belarus President claiming the competition is subject to the IIHF "fending off pressure."

"I want to assure you as the IIHF President and as a friend of Belarus that there will be no issues on any front in Belarus: neither coronavirus, nor in terms of political security or physical security of people who live here and people who will come as guests," Aleksandr Lukashenko said.

"Protesters and other dissatisfied people do not storm Government offices and capitols here.

"We have a perfectly normal situation in terms of democratic processes.

"This is the main reason why some politicians in Europe are discontent with Belarus.

"They want to accuse me of defending my country and people, but this is why the people elected me.

"I have an obligation to ensure public, internal and external security of people and the state.

"Maybe some in the West do not like my actions in this regard, but this is up to them.

"Answering the main question about my attitude to all the recent developments around the IIHF World Championship in Belarus, I will tell you frankly: I will be OK with any development of the situation.

"I think you know this for sure.

"If the International Ice Hockey Federation cannot cope with the pressure of some political circles from individual countries, there will be no World Championship in Belarus, everything depends on you today.

"I agree with your recent statements: sport should unite nations, not divide them, and sports and politics should not mix, as much as it is possible."

The BBSF has criticised the meeting between Fasel and Lukashenko, with the group saying the "cordiality and warmth" of the meeting "gave the impression that the meeting was not taking place in the country where more than 30,000 people have been imprisoned during the past four months and where about 170 political prisoners are still behind bars."

The BBSF had called on the IIHF to announce "the impossibility of holding the 2021 IIHF World Championship in Belarus due to the gross violation of human rights and all universal principles by the Lukashenko regime."

Russia had offered to replace Belarus as host, but it would no longer be permitted to do so under sanctions imposed on the country by the World Anti-Doping Agency which will also see it unable to compete under the national flag at the event, should it go ahead.

The 2021 Men's World Championship is scheduled to be held from May 21 to June 6, with games to be played in Riga and Minsk as things stand.