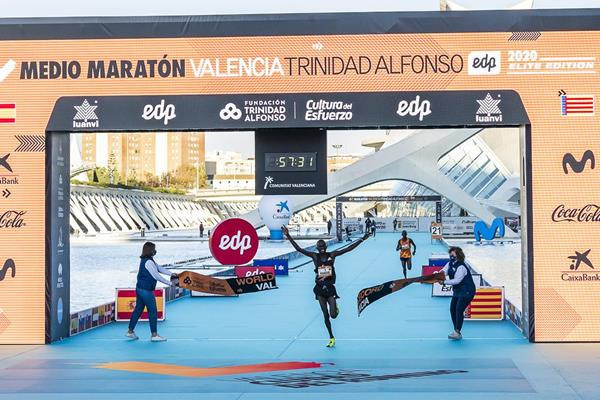 Kenya's Kibiwott Kandie has set a world record for the men's half marathon after smashing the previous best by 29 seconds in Valencia.

Clocking a time of 57min 32sec at the Valencia Trinidad Alfonso EDP Half Marathon this morning, Kandie became the first man to break 58 minutes, beating his compatriot Geoffrey Kamworor's former best from 2019, 58:01.

Kandie broke the record after winning silver at the World Half Marathon Championships in Gdynia in Poland, in October.

The fastest men's half marathon race in history, the top four all dipped under the previous world record, with Jacob Kiplimo of Uganda being the best of them, finishing in 57:37.

Kenyans Rhonex Kipruto and Alexander Mutiso were third and fourth in 57:49 and 57:59.

"I can’t believe it, I have beaten Kamworor’s world record by half a minute," said Kandie.

"Today is a great day for me and also for Kenya."

Kipruto's 57:49 is the fastest half marathon debut ever, while Kenya’s Philemon Kiplimo had to settle for fifth in 58:11 - a time that had only previously been bettered by Kamworor before today.

Meanwhile, Ethiopia's Genzebe Dibaba was a comfortable winner on her half marathon debut, making it the fastest time a debutant has ran in the women's race.

A distance behind was Kenya's Dorcas Tuitoek in fourth in a time of 1:07:18, marginally ahead of the United States' Emily Sisson in 1:07:26.

Dibaba is the world record holder over the 1,500 metres and five-time world indoor champion.

She also won silver at the Rio 2016 Olympics in the 1,500m, also winning world gold over the same distance at the 2015 World Athletics Championships and later bronze in the same competition in the 5,000m.