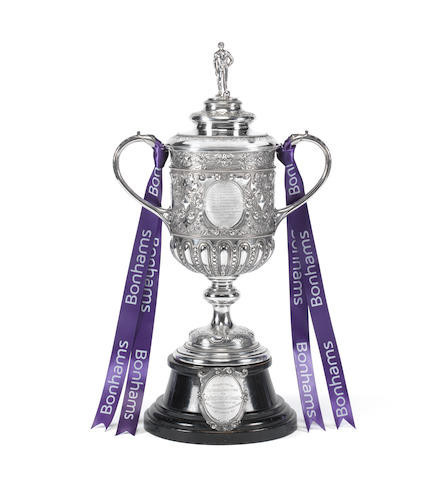 The historic silver trophy formed as a two-handled cup and cover, surmounted by a figure of a footballer with a football at his feet, was awarded to the winning team in the oldest national football competition in the world between 1896 and 1910.

It is now due to be the star exhibit in the "Spectacular Sporting Trophies & Memorabilia" auction organised by Bonhams to take place in London on September 29.

The trophy had been put up for sale by West Ham United co-owner David Gold.

Since then it has been exhibited at The National Football Museum, first in Preston and latterly Manchester, but is now being put up for sale again by the private United Kingdom collector.

The first FA Cup trophy used between 1872 and 1895 was stolen from the Birmingham football outfitter William Shillcock's window in September 1895 when it was on display after Aston Villa had won it that year.

As current holders of the trophy and, therefore, custodians of it, Aston Villa were fined £25 for its loss.

The FA decided at a meeting in January 1896 to manufacture a replacement trophy "nearly as possible like the old cup should be purchased".

Another trophy, costing £25 and of twin design to the original, was ordered.

A cast of "the old cup" existed and Vaughton & Sons of Birmingham were commissioned to produce an exact replica.

This is the trophy offered here for sale.

The trophy, which is 50.7 centimetres high with the plinth, bears the winners' names from 1872 onwards, including Wanderers, winners of five of the first seven finals, including three in a row.

The team based in Upper Norwood in London were then presented with the trophy in perpetuity only to apply the "Corinthian" spirit of the amateur game at the time and return it to The FA - ironically, they never won it again.

Other amateur teams who won it during this period included Oxford University, Royal Engineers, Old Etonians, Clapham Rovers and Old Carthusians before the southern stranglehold on the trophy was broken in 1883 by Blackburn Olympic, leading to the dominance of clubs from Northern England and the Midlands.

The first winners of the new trophy in 1896 were Sheffield Wednesday, who beat Wolverhampton Wanderers 2-1 in the final to claim their first major honour.

In 1897, Aston Villa defeated Everton 3-2 in front of 65,891 spectators at Crystal Palace to become only the second team ever to win "the Double" of the Cup and Football League First Division Championship in the same season.

Last August the club were expelled from the English Football League, having been members since 1894, because of financial difficulties.

The trophy was retired in 1910 after Newcastle’s 2-0 victory over Barnsley and presented the following year to Lord Kinnaird by The FA to mark his 21st anniversary as President of the national governing body.

Kinnaird had played and scored a goal in the second-ever FA Cup final in 1873 when Wanderers defeated Oxford University 2-0.

He went on to play in a further eight finals for either Wanderers or Old Etonians and ended up on the winning side on five occasions in total between 1873 and 1883.

His record of playing in nine FA Cup finals is one that stands to this day.

Kinnaird's record of five wins in the competition stood until 2010, when it was broken by Ashley Cole, who played for Arsenal and Chelsea.

During a recent clean of the trophy, by Bonhams head of silver department Ellis Finch, the figure of the footballer on top was carefully removed revealing hitherto unknown graffiti in the form of various initials.

It is presumed that this is of former players and club officials of winning teams of the trophy and other scribbles, the most decipherable being "J P Watt Newcastle 1910".

Research has revealed that there was no J P Watt who played for Newcastle, but Frank Watt is listed as their first unofficial manager and oversaw the winning of the FA Cup that season.

For more details, including how to bid, click here.