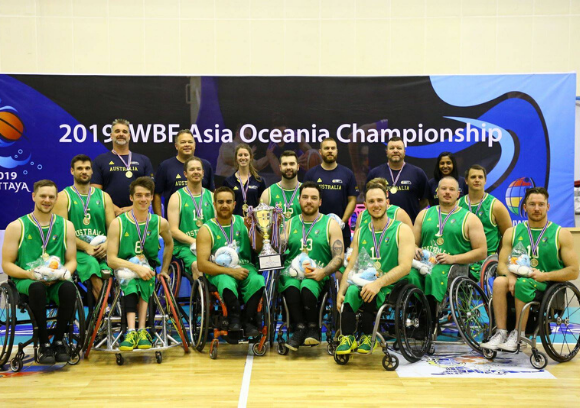 Australia has named its men's wheelchair basketball squad which will prepare for the postponed Tokyo 2020 Paralympics.

The country has selected an initial group of 25 players for the Games, which are now scheduled for next year because of the COVID-19 pandemic.

Twelve players will feature in the final squad, with eight previous Paralympians part of the larger group.

They include captain Shaun Norris, who alongside Tristan Knowles will hope to appear at a fifth Paralympic Games.

Brett Stibners is also included and will look to compete at a fourth Games in Tokyo.

"I'm really excited that given the postponement of the Paralympics from 2020 to 2021 we get the chance to open the squad up for another year," said Australia head coach Craig Friday.

"This gives us more time to explore the talent among the group and also an opportunity to see where we can improve ourselves and be better.

"You take the good with a situation such as this.

"The extended time until Tokyo now gives us more training time to really push and see who can bring us there."

The Australian men's side, nicknamed the Rollers, won the Paralympic title at Atlanta 1996 and Beijing 2008, and also boasts silver medals from Athens 2004 and London 2012.

In November, they won the Asian/Oceania qualifying tournament to book their Tokyo 2020 place.

"The impact of COVID-19 and interstate travel restrictions has made it difficult for us as we tried to organise camps and training over the past couple of months," said Norris, a gold medallist from Beijing 2008.

"However, the push to 2021 for Tokyo has its positives, and it will allow us to open the squad up to all our players, providing the whole group more opportunity to work hard and prove to the team that they can make it."

The full squad can be found here.