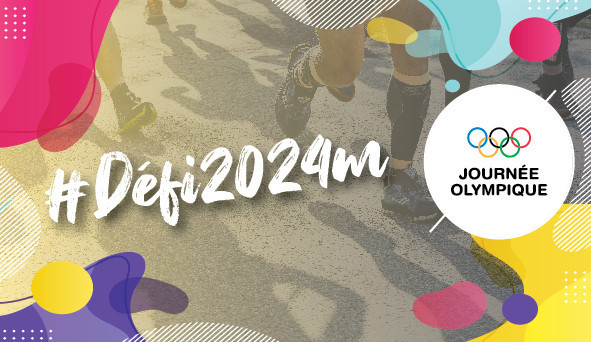 The French Olympic Committee (CNOSF) is encouraging people to walk, run or cycle 2024 metres on Olympic Day, choosing the distance to symbolise that the Olympics are coming to Paris in 2024.

Events around the world that would normally take place to mark the anniversary are either being cancelled or being replaced by virtual alternatives.

In France, people are being asked to walk, run, cycle, scooter or rollerblade 2024 metres, symbolising that the country will host the Olympic Games in 2024.

Participants can travel the distance alone or with others, as long as social distancing rules are followed.

Those taking part are being encouraged to take pictures of themselves completing the challenge and sharing them on social media using the hashtags #Olympic Day, #Défi2024m or by tagging @FranceOlympique.

The #Defi2024m is part of a week of events being organised by CNOSF to mark Olympic Day.

On June 22, all sports federations and institutions related to the French sports movement are being invited to share a photo of themselves with an appropriate sporting object.

Images should then be published on social media with another federation tagged.

The goal of the exercise is to create a so-called sports movement channel.

Then from June 24 to 26 the three Olympic values of excellence, friendship and respect are being celebrated across three days.

The CNOSF is encouraging people to share a moment of sport linked to the chosen value each day in the form of a photo, a text, or a quote.

Content around the theme will be shared by the CNOSF followed by debates each evening, featuring current and former athletes.

Schools across France are being encouraged to take part in Olympic Day activities on June 23, which include a 2024 metre race, which can be completed in relay form either in person or virtually.

If students are in school on the day, they are being encouraged to dress in sporting clothing and they are also able to share work related to Olympism, which could be in the form of a definition, a poem or a sporting memory.

Students are also being encouraged to participate in sports challenges posted on social media by stars including freestyle skier Ophélie David and break dancer Martin Lejeune.