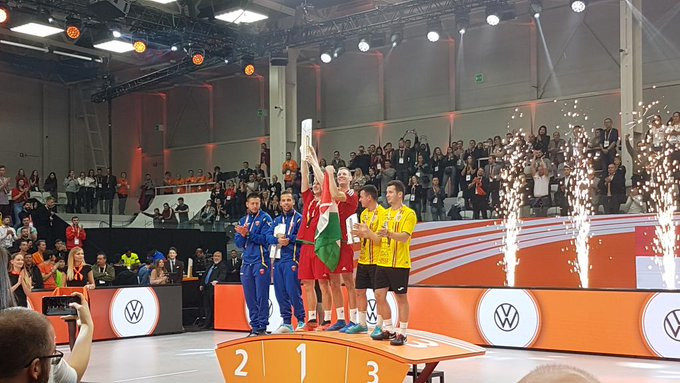 Ádám Blázsovics earned his and Hungary's second gold medal of the Teqball World Championships in front of a joyous home crowd here.

Having already triumphed in the singles event yesterday, Blázsovics teamed up with Csaba Banyik to claim the doubles title.

The duo came up against Nikola Mitro and Bogdan Marojević of Montenegro, the defending champions.

The second game was more closely fought, with the Hungarian pair having to launch a comeback to narrowly win 20-18.

Bronze medals went to Zsolt Lazar and Szabolcs Ilyes of Romania, 20-13, 20-19 winners against Julien Grondin and Hugo Rabeux of France.

The doubles gold-medal match was preceded by the mixed doubles final, with the host nation represented yet again.

Banyik and partner Zsanett Janicsek were unable to secure a clean sweep for Hungary, however, losing 2-1 to Natalia Guitler and Marcos Viera.

The Brazilian duo took the first game 20-15, before Banyik and Janicsek battled to a 20-19 result in the second game.

Ignoring the partisan crowd, Guitler and Viera secured the gold medal by triumphing 20-14 in the decider.

Lazar was unable to achieve another bronze medal, losing 20-13, 20-14 to Mitro and Maya Umicevic in the third-place playoff alongside partner Maya Umicevic.

A lively and colour Opening Ceremony was held before the matches, while footballing legends such as Ronaldinho of Brazil, Carlos Puyol of Spain and William Gallas of France participated in an all-star game during the break.