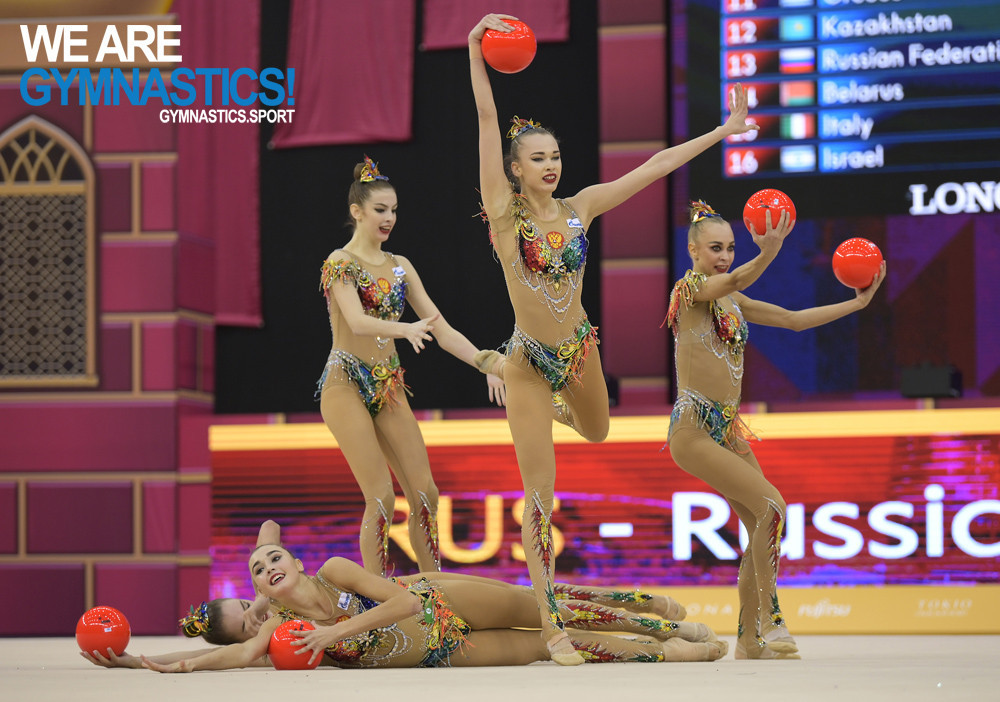 Russia won a fourth consecutive group all-around title at the Rhythmic Gymnastics World Championships in Azerbaijan, and a seventh gold so far at this event.

Russia, for whom Dina Averina had won a third consecutive individual all-around title, finished on 58.700 points, with Japan taking silver on 58.200 and Bulgaria bronze with 58.000 at Baku's National Gymnastics Stadium.

Having swept the gold medals in individual competition, Russia dominated the 24 groups in contention for medals in the Group all-around final, which also served as the qualification round for tomorrow's event finals with the 5 Balls and 3 Hoops/2 Pairs of Clubs.

Tomorrow's final in this International Gymnastics Federation (FIG) competition also served as the second Olympic qualification for groups, which means that  Japan, Belarus, Israel, China and Azerbaijan have earned the right to send teams to participate in Tokyo next summer.

Six spots for groups remain up for grabs, and which countries get them will be decided through events next spring.

Led by a pair of 2016 Olympic champions in Anastasiia Maksimova and Maria Tolkacheva, the Russian group, which also featured 2018 world gold medallists Anastasia Shishmakova and Evgeniia Levanova, and newcomer Anzhelika Stubailo, began their day with a 28.700 for the 3 Hoops and 2 Pairs of Clubs, the third best score in the category.

Needing something big to retain the title, the group recorded the highest score of the competition, 30.000 points, for its second routine with the 5 Balls, assuring that the Russian anthem would play once again during the victory ceremony inside the National Gymnastics Arena.

"We are really satisfied, especially with our performance with the 5 Balls, which we did very well," said Tolkacheva, noting that 30 was the team's highest mark of the season with the apparatus.

"Our first score with the hoops and Clubs wasn't too high, but we received special encouragement before our second routine, and that helped us a lot."

Russia is once again threatening to sweep all the titles at the World Championships.