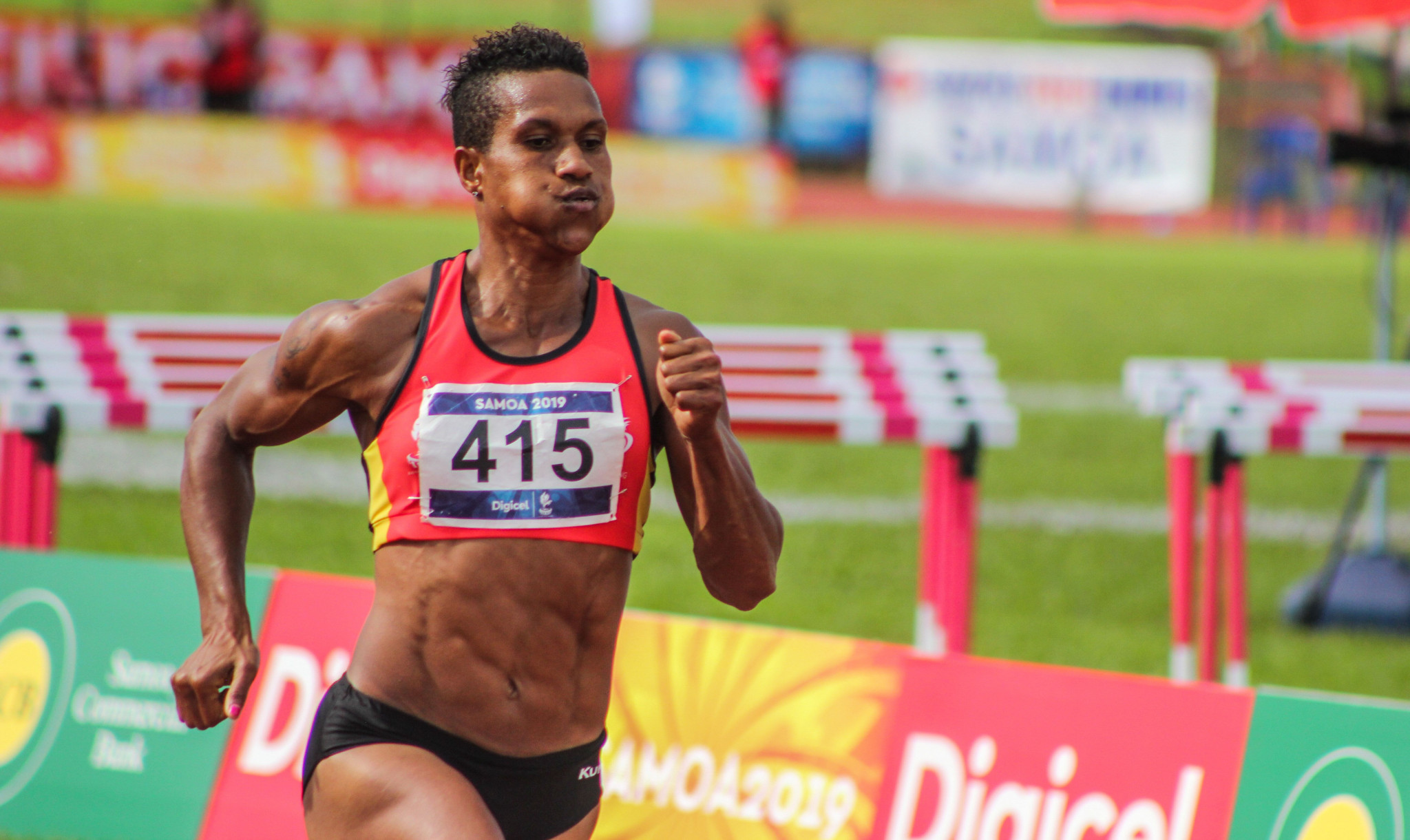 Toea Wisil has written her name indelibly into Pacific Games history after she completed the triple-triple in the women's sprint events.

The 31-year-old from Papua New Guinea added gold in the 200 metres to her successes in the 100m and 400m today to make Samoa 2019 the third successive Games in which she has swept the three events, following Noumea 2011 and Port Moresby 2015.

She won in a time of 23.45sec running into a hefty headwind, beating 17-year-old Heleina Young by just over half-a-second – the Fijian ran 24.01.

Fiji's Banuve Tabakaucoro completed a treble of his own as he won the men's 200m for the third successive Games, to match his record in the 100m.

He claimed victory by barely a whisker from home favourite Jeremy Dodson, with just 0.04 seconds in it – Tabakaucoro ran 20.87, Dodson 20.91.

Dodson stormed the last 50 metres and nearly caught the Fijian, willed on by a frenetic Apia Park, but could not quite catch the champion in what was the best race of these Games so far.

Elsewhere in the athletics, Samoa's Kelvin Masoe thrilled a packed crowd as he claimed gold in the men's long jump.

The 20-year-old, a bronze medallist in the 100m earlier this week, leapt 7.65m for a comfortable yet surprising victory ahead of New Caledonia's Mar Delaunay-Belleville, who jumped 7.27m, and Papua New Guinea's Peniel Richard whose jump of 7.01m secured him bronze.

A Pacific Games record was set in the women's 100m hurdles as Australia's Brianna Beahan won gold in 13.17.

Foliaki streaked along the rain-sodden track in 14.52, closely followed by Po'oi in 14.55.

Papua New Guinea enjoyed a superb day at the athletics all round, winning a host of gold medals as they rose to second on the overall Pacific Games medal table.

One of their brightest stars has been Poro Michlyn Gahekave and she added gold in the women's 1,500m to victory in the 5,000m earlier this week.

Papua New Guinea also won both the men's and women's 4x400m golds, with Fiji taking silver in each race while Vanuatu won both bronzes.

Papua New Guinea's Sharon Toako took gold in a dramatic women's javelin competition that had to be paused due to heavy rain which plagued the whole schedule.

Toako eventually secured top spot on the podium with a throw of 47.13m.

Linda Selui of New Caledonia took silver with a throw of 45.49m and Gwoelani Patu of Tahiti bronze with 42.17m.

Kaputin and Richer had also earned silver and bronze in the women's high jump.

A number of countries are jostling for second in the final medal tally along with Papua New Guinea; these include Tahiti, winners of the gold medal in the men's 5,000m.

Samuel Aragaw took the title by completing the event in a time of 15min 45.54sec.

Fiji's Avikash Lal won the silver medal after crossing the line four seconds down in 15:49.93.

Wallis and Futuna took two places on the podium in men's discus, winning gold and silver in a tight competition to continue a good week for the French islands in the athletics.

There was also another gold for medal table leaders New Caledonia as Thierry Cibone won the men's shot put secured, primarily for Para-athletes in wheelchairs.

The heptathlon also drew to a close with Elenani Tinai of Fiji taking the gold medal, beating the Papua New Guinea duo of Raylyne Kanam and Edna Boafob into silver and bronze respectively.