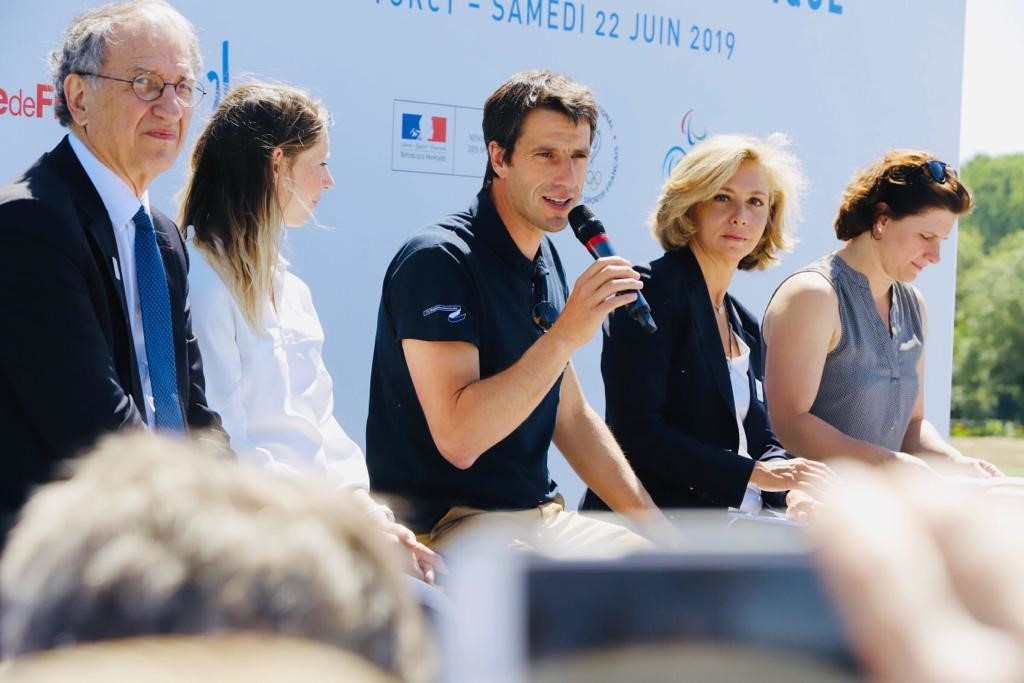 Paris 2024 President Tony Estanguet took to the rapids as the Île-de-France Olympic Water Sports Stadium was officially opened as part of Olympic Day celebrations in Paris.

Based 35 kilometres from the centre of the capital at Vaires-Torcy Leisure Centre, the arena will host the canoeing and rowing events at the 2024 Olympic and Paralympic Games.

Estanguet was joined by French Minister for Sport Roxana Mărăcineanu and President of the Île-de-France region Valérie Pécresse on rafts as the whitewater channels were tested for the first time.

Estranguet said he found the channels fast and technical at the venue, just the third globally that caters for all three Olympic and Paralympic disciplines – slalom, sprint and paracanoe – and rowing.

“It means a lot to me to see the whitewater channel for myself, in its Olympic layout," he said.

"Every channel is different and the one at Vaires-sur-Marne has taken its inspiration from best practice in every area.

"It is very exciting to negotiate.

"We will be delighted and proud to welcome the world’s greatest champions in 2024.”

The course has been designed by the Île-de-France region with support of the state with the plan to develop water sports in the area and make it accessible to local people.

A group of Generation 2024 youngsters joined the delegates for the official opening of the facility, which comprises the whitewater stadium, training channel and a training and accommodation centre, home to 140 beds.

Generation 2024 was brought about in Paris' bid for the 2024 Olympic and Paralympic Games and works to develop sport in school and produce the next generation of athletes.

Twenty-four people aged between 17 and 26 sit on the Generation 2024 Committee, with members of the group coming from various backgrounds.

Discussing the facility, Mărăcineanu said: “France can take pride in a truly outstanding setting, one of the few venues in the world to provide a single home for canoe slalom and sprint and for rowing, not to mention a wide range of leisure and adventure sport activities open to the public.

"It will also allow the rowing and canoeing federations to speed the development of their sports.

"And last but not least, spectators will be able to watch the various events from closer than ever before at a compact site that is easy to reach and unmistakably modern.”

The facility includes two courses measuring 300 metres and 150m, natural terracing for up to 2,000 spectators and five hectares of landscaped area, including 450 trees.

There is also 250m of landscaping on the banks of the Marne river.

The Olympic Water Sports Stadium will provide a home for the French Federation, its regional committee and its national and youth hubs.

It will also be the base for the Île-de-France Rowing League, its youth hub and the logistical platform of the French Rowing Federation.

"It is an ideal venue for hosting the Paris 2024 Games.

"It is also the 21st-century facility that the federation needs in order to develop itself and paddle sports across the country.

"It thus has all the makings of being the centrepiece of the federation’s development strategy.”

The opening was held in partnership with the Festival of Sport and more than 700 events will take place across France today and tomorrow to promote the values of sport and Olympism.