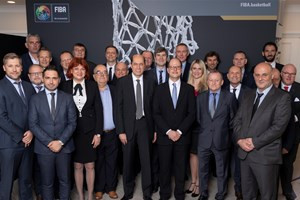 Turgay Demirel has been re-elected President of International Basketball Federation (FIBA) Europe for a second term at the governing body's General Assembly in Munich.

This makes the Turkish official the second elected member of the FIBA Central Board for the 2019-2023 cycle after Burton Shipley, re-elected President of FIBA Oceania earlier this month.

A former member of the Turkish national team and President of the Turkish Basketball Federation, Demirel has headed FIBA Europe since 2014 and is now set for another term of office until 2023.

He is also the vice-president of FIBA.

Having received 27 of 50 votes, he prevailed over FIBA Europe vice-president Cyriel Coomans of Belgium in the second round of voting.

Dejan Tomašević, the secretary general of the Basketball Federation of Serbia, did not progress to the second round.

"I would like to thank all candidates and each national federation for showing their support to the candidates they trust," Demirel said.

"I would like to congratulate all the elected Board members.

"It promises to be an exciting era and as I said before, we can only be stronger if we remain united in our family in Europe but also all over the world.

"We know exactly what the challenges are and we are ready to work hard for the next four years."

"The new Board has a great diversity and representation from all corners of Europe, a proof that basketball is not a privilege of only a few nations.

"We look forward to continuing working well together for the good of the game."

Austria's Karl Thaler was re-elected as FIBA Europe treasurer with 27 votes - five more than Poland's Grzegorz Bachański who was also challenging for the position.

The General Assembly also elected 23 members of the Board during the meeting.

Demirel paid tribute to former FIBA secretary general Patrick Baumann and FIBA Europe honorary member Noah Klieger, both of whom passed away last year, and invited all delegates to a moment of silence.

Muratore then addressed the General Assembly, saying: "I have been for many years in your position, as President of the Argentine Basketball Federation and I know well that your work is not easy.

"It is not easy to coordinate your regions, maintain the professional league and be frequently successful in the international championships.

"As FIBA, we have opened the door at maximum level to more federations.

"Eight national teams played to help their teams to the World Cup and almost 100 countries will play in the next cycle of qualifiers for the Continental Cups 2021, including EuroBasket.

"And, although in this continent, someone tried to boycott us, we have seen full venues, national teams returning home and great emotions until the last minute of the last game."

"In addition, FIBA has supported, and will continue to support, the youth competitions," he added.

"These last five years have given us another great tool to develop our federations, a new Olympic discipline, the 3x3.

"3x3 is part of the legacy of Patrick Baumann."

As well as the annual reports from Novak, the chairpersons of the different commissions of FIBA Europe and Walter Pfaller, the President of the European zone of the International Wheelchair Basketball Federation, the proceedings also included an update on the implementation of the ONE FIBA vision, as well as some changes to the bye-laws of FIBA Europe.

The 46 voting delegates unanimously approved amendments to the bye-laws of FIBA Europe, with the major change being the implementation of a six-member Coordination Council, which, it is claimed, will ensure cooperation between FIBA Europe and FIBA.

The delegates accepted a proposal by the Lithuanian Basketball Federation to host next year's General Assembly in Vilnius.

The proposal by the Basketball Federation of Bosnia and Herzegovina to hold the 2021 General Assembly in Sarajevo was also approved.