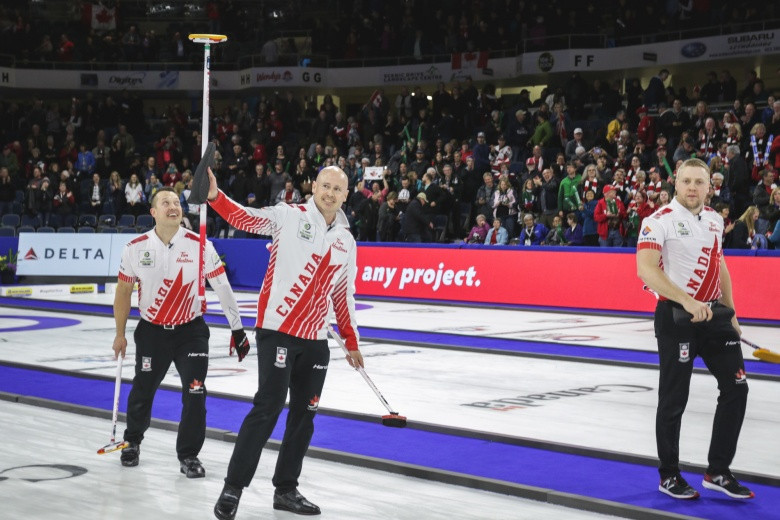 Canada will face defending champions Sweden for the world title once again after those sides won their respective semi-finals at the Men’s World Curling Championships in Lethbridge today.

Sunday’s match-up will mark the third successive time the two nations have fought for gold, after Canada won in 2017 and Sweden took the top prize last year.

The hosts advanced this time around with a tense 6-5 victory over Switzerland, in which an extra end was required at ENMAX Centre.

After no points were scored by either side in the first end, Canada’s captain Kevin Koe managed two in the second before both sides scored one in the third.

The scores went back and forth for the rest of the match until it read 5-5 after 10, meaning an extra end was needed.

Canada had the last-stone advantage and that proved pivotal, Koe using it to knock Switzerland’s two stones out of the house for one decisive point.

For all of the highlights from day 8️⃣ at the Pioneer Hi-Bred World Men's Curling Championship 2019 visit https://t.co/i7W8YXfo6R

“It was a tight game, we got all we could hope for, tied it up with the extra and then we just made it.

“It’s a dream come true to have this event here, the crowd’s been unbelievable and we’re happy to win for them.”

In contrast, Sweden advanced with a comfortable 8-2 victory over Japan.

“We’ve played really well through the whole event up to this, so we tried to talk about the small details and tried to put everything together in one game and I think we did just that.

“From the start, we didn’t miss much at all.”

The gold medal match will take place at 5pm local time tomorrow, following the bronze medal contest between Switzerland and Japan at midday.