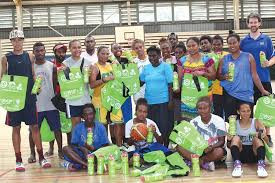 The Solomon Islands have appointed Eric Malcolm head coach of the men's basketball team set to compete at this year's Pacific Games in Samoa.

The 40-year-old previously coached the Solomon Islands' women's team who pulled off an historic victory in the 2017 Melanesia Cup, winning their first trophy after 11 years of international competition.

The Solomon Islands men's team were given a wild card for Samoa 2019, due to take place between July 7 and 20, completing the eight-strong line-up.

"I am extremely honored to be named head coach, my first men's appointment at this level," Malcolm said.

"I've been working with a lot of the boys for quite some time, so I'm proud to be able to lead them at the Pacific Games.

"The wild card opportunity is massive for Solomon Islands basketball and it gives five-on-five continuity as our squads continue to build towards participation as the host nation of the 2023 Pacific Games."

Training is well under way for the Solomon Islands, who will compete alongside defending champions Guam, Fiji, Papua New Guinea, New Caledonia, Tahiti, Tonga and Samoa.

"Preparations consist of four sessions a week, which are made up of on-court and strength and conditioning work," Malcolm said.

"My assistant coach, Gregory Ramos, and I will sit down with the squad to go through some goal-setting.

"As the wild card entry, it probably takes some of the pressure of expectation off the team, but that doesn't mean we're going to the Pacific Games to make up the numbers.

"We want to be as competitive as possible and we're going to give the team every opportunity to perform at their best."

Malcolm is optimistic the tournament will lay solid foundations for the 2023 Pacific Games in the Solomon Islands.

"The Solomon Islands Pacific Games contingent alone will be around 300 people, so being in Samoa in itself will be a great experience," he said.

"In terms of match-ups, playing against PNG will no doubt be a big occasion, probably also Fiji as we have connections with some of the boys who live and study over there.

"This is only the beginning of the resurgence of Solomon Islands basketball and there are many more good times ahead."