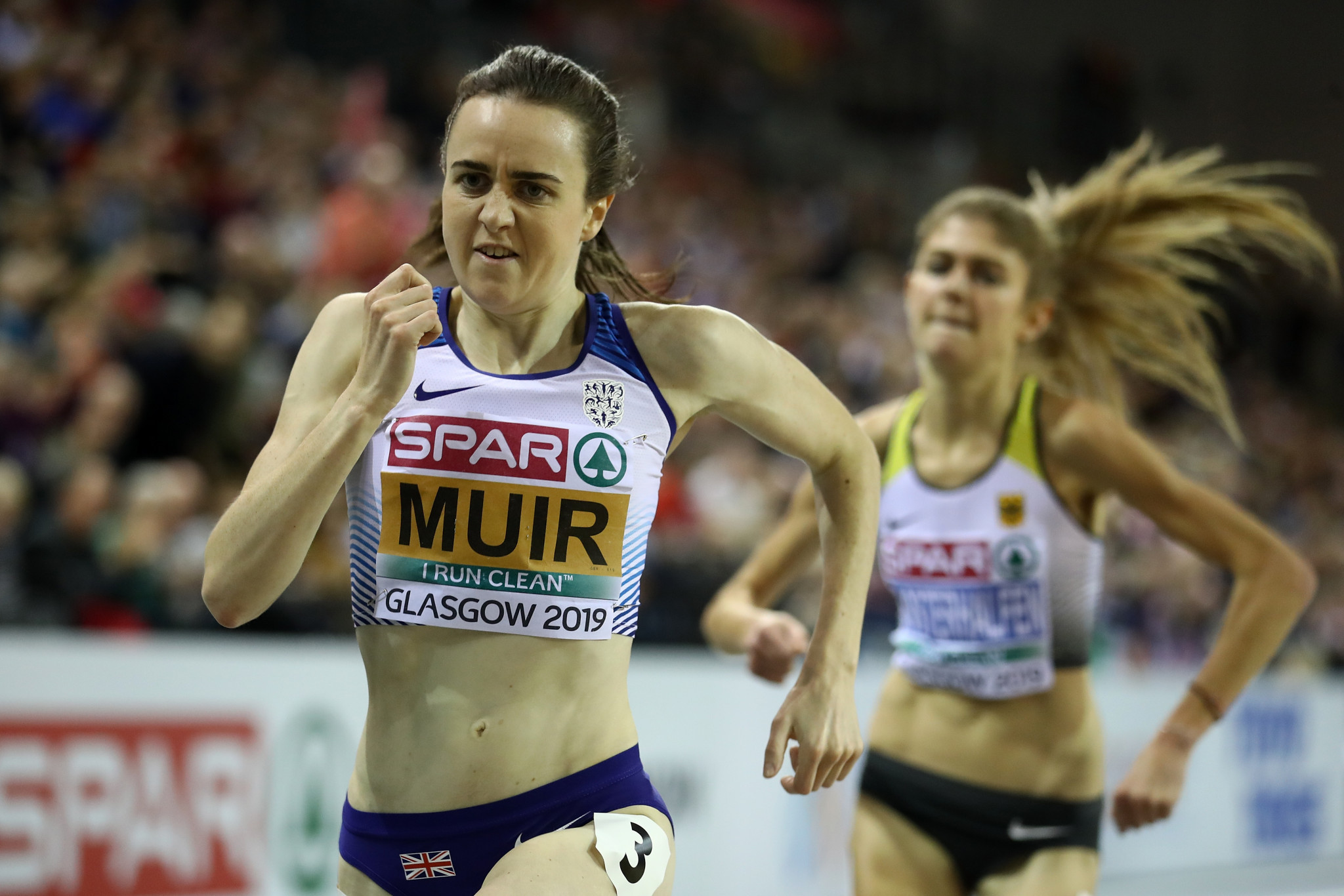 Laura Muir and Katarina Johnson-Thompson secured a golden double for the home team on the opening evening of the 2019 European Athletics Indoor Championships here.

In front of a packed and expectant crowd, local heroine Muir smashed her own championship 3,000 metres record by more than five seconds as she powered to the line in 8min 30.61sec to retain the first of the titles she won in Belgrade two years ago, having teed up the second defence by winning her 1,500m heat earlier in the evening.

It was a momentous night for Britain as 19-year-old Niamh Emerson took pentathlon silver behind Johnson-Thompson, and Melissa Courtney won 3,000m bronze in a personal best of 8:38.22 behind Germany's Konstanze Klosterhalfen, whose long drive for home eventually earned her silver in 8:34.06.

The first gold of these Championships, in the men's shot put, went to Poland's outdoor champion Michal Haratyk, who threw 21.65m to win a hugely competitive final ahead of Germany's former world champion David Storl, who managed 21.54, and Tomas Stanek of the Czech Republic, who took bronze with 21.25.

After her German rival, who was concentrating here on this event, moved to the front with 1,600m remaining, Muir, her pale face grim with determination, set herself for a long pursuit before making a decisive move at the bell and producing a sustained, full throttle drive for home over the final 200m, lapping runners all the way round.

Twenty-nine years after these Championships were last held in Glasgow, when Tom McKean took 800m gold at the Kelvin Hall, the city had itself another European indoor champion.

"To get this result in this arena - when all is said and done - will be one of the highlights of my career, if not the best moment," Muir said.

"As soon as I walked out I felt like 'yeah, this is home'.

"I have run on this track hundreds, if not thousands of times, so I just felt as if I could do what I normally do here, and that was enough to win.

"To win with a championships record, and to do it here, is a dream.

"Now I will try and recover before the 1,500m final - lots of ice baths, massage and rest.

"My Mum, my gran and all the aunties, uncles and family friends were here.

"It was hard to get them all tickets.

"My gran is always there when I have not done so well, so this is the first time she has seen me win a medal.

"The field was very strong and the girls gave me a great race.

"I certainly thought I had a lot of pressure competing in front of the home crowd and then adding on the double.

"I just put my head down and gave it absolutely everything I had."

Muir had begun the evening facing a similar challenge to that of Jakob Ingebrigtsen earlier in the day.

Two-and-a-half hours before she toed the line in defence of her 3,000m title she had won an unhelpfully swift 1,500m heat in 4:09.29 - a fact that made her later performance all the more awesome.

Johnson-Thompson secured the first of the home golds with 4,983 points, the fourth best total ever recorded, with Emerson, the world under-20 champion who took bronze behind her gold in last year’s Commonwealth Games, securing second place with a personal best of 4,731 ahead of Solene Ndama, who equalled the French record with 4,723.

It was another composed and ultra-competitive performance from the 26-year-old world indoor and Commonwealth Games champion as she regained the title she had won in Prague four years earlier.

After three events Johnson-Thompson was ahead of her Prague schedule, which eventually earned her a British and championship record of 5,000 points, and as she approached the final two events there was speculation that she might challenge the world record of 5,013 set by Ukraine's Nataliya Dobrynska in 2012.

That, however, would have required an outstanding long jump - and Johnson-Thompson had to be content with something slightly less, albeit a season's best of 6.53m that sent her through to the concluding 800m with a total of 4,006 points and a commanding lead of 202 - giving her a cushion of just over 13 seconds.

The gold was there, but she pushed hard in the final, taking the lead at the bell and stretching down the back straight before winning in 2:09.13, taking more than three seconds off her indoor personal best.

"It's been a great day, it's been amazing," said Johnson-Thompson.

"I was going to say I couldn't really ask for more, but I felt in the long jump I could have maybe gone a bit more.

"I was really happy with how it went overall - 4,900 points is a really good score, so I am happy, I am really proud of myself."

The pentathlon competition resumed in the evening session minus fourth-placed Anouk Vetter of The Netherlands, winner of the shot put with 15.40m, who had to withdraw with injury.

Johnson-Thompson had taken three assured steps towards another title with her performance in the morning session, where she had equalled her season's best in the 60m hurdles with 8.27, before moving into a lead she would never lose with a high jump of 1.96m, just a centimetre below her best, before setting a personal best of 13.15m in the shot put.

Emerson collapsed over the line, unsure of her result, before lighting up as the stats came through.

Johnson-Thompson, prostrate with effort, smiled down the track at her floored compatriot.