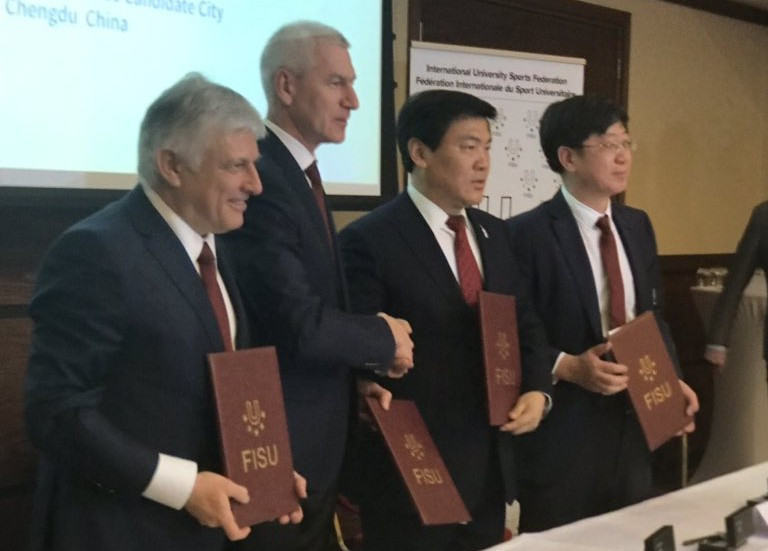 Chengdu has officially been confirmed as the host of the 2021 Summer Universiade by the International University Sports Federation (FISU).

The decision was made at the FISU Executive Committee meeting here today, prior to the start of the Winter Universiade tomorrow.

The award of the Summer Universiade to Chengdu had been a near certainty following FISU and officials from the Chinese city entering a "pre-attribution contract" back in December.

Chengdu was the sole candidate to host the Universiade.

They will succeed Naples as hosts and will receive the FISU flag from the Italian city at the Closing Ceremony of the upcoming edition of the university sport event.

FISU President Oleg Matytsin had claimed a delegation from the organisation had been "amazed by the quality of the presentation" when visiting Chengdu last month.

A newly conceived 40,000-capacity stadium was one of the main venues viewed on the evaluation visit.

The Crown Lake Sports Centre, which can hold around 40,000 spectators and will host the Opening and Closing Ceremonies, was among the sites visited last month

It will also hold athletics competitions at the Universiade.

The delegation also visited the campus of Chengdu University, which will house the Universiade Village as well as the volleyball competition venue.

Chengdu will be the third Summer Universiade host in China in two decades, after Beijing in 2001 and Shenzhen in 2011.

The capital of Sichuan province in central China, Chengdu is known as the home of the giant panda due to a breeding centre in the city and a nearby nature reserve.

Confirmation of Chengdu's hosting will be welcomed by FISU with two years to go until the Universiade.

The organisation had been forced to reopen the bidding process for the 2019 event back in 2014, following the withdrawal of the Brazilian city Brasília as hosts.

Naples stepped in as hosts in 2016 but have faced challenges posed by the shortened preparation period to hosting the event.

Chengdu is expected to host the Unviersiade from August 8 and 19 in 2021.

Table tennis, taekwondo, tennis, volleyball and water polo are also included, while badminton will be a compulsory sport for the first time at Chengdu 2021.

A further three optional sports will be included, with Chengdu having selected rowing, shooting and wushu.

Among the 41 sports venues proposed for the Summer Universiade, FISU claim 30 venues already are at an international standard.

The remaining 11 venues are set for renovation, which is claimed will bring long lasting benefits to Southwest China.

"It was a great honour to have the Mayor of Chengdu, Mr Luo Qiang, and his colleagues join us here to share their vision for hosting the Universiade," said Matytsin.

"Clearly Chengdu is a city with both a rich history and a bright future.

"We feel very privileged to have the opportunity to be a part of that future, bringing the best student athletes from all over the world to Sichuan’s capital.

"We have no doubt that Chengdu 2021 will prove to be an exceptional Universiade that will make a lasting and very positive impression both on the participants and the city itself."

Organisers claim the city boasts a special transportation system with environmentally-friendly vehicles which will allow 24-hour travel for athletes and delegation officials.

An effective marketing and promotion strategy was also included as part of the city's plan.