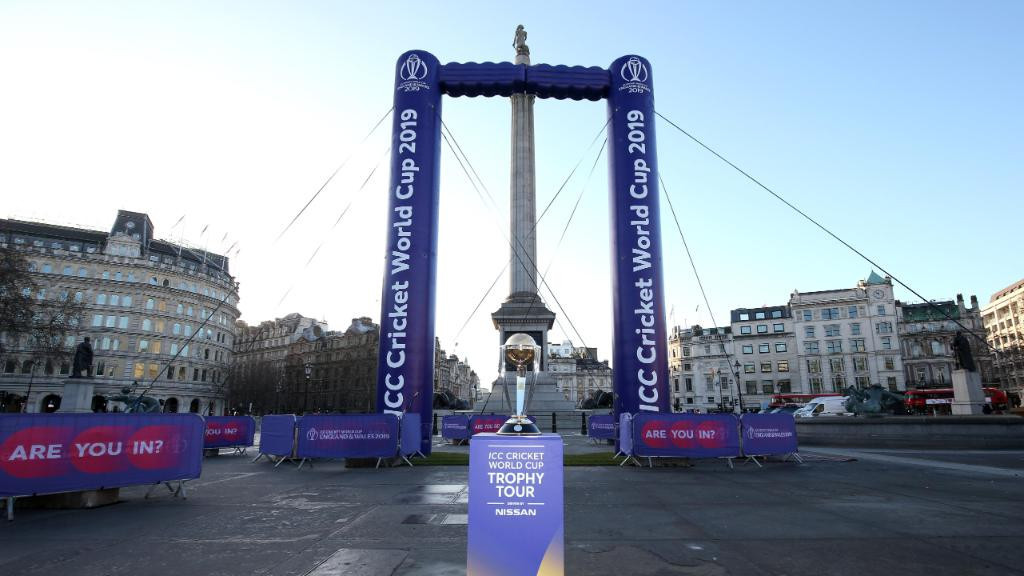 A host of current and former players were in attendance as Nelson's Column in London was transformed into a giant set of wickets to mark 100 days to go until the start of the Cricket World Cup.

"Years of planning goes into the delivery of an ICC Men’s Cricket World Cup, but the excitement becomes real with 100 days to go and the arrival of the trophy on the shores of England and Wales," ICC chief executive David Richardson said.

"Transforming one of London’s most famous landmarks into giant wickets is a wonderful way to kick start the celebrations for what I know will be the greatest ever celebration of cricket for hundreds of millions of fans around the world.”

The trophy will visit 115 locations, including in all cities due to host games at the event, at a total of 100 events before the World Cup begins on May 30.

Former England spinner Graeme Swann will serve as an ambassador of the Trophy Tour, which also includes free to attend "Super Saturday" events in Manchester, Birmingham and Bristol.

"The tournament is within touching distance now and it’s amazing to see the takeover of the iconic London location of Trafalgar Square to mark 100 days to go," said 2019 Cricket World Cup managing director Steve Elworthy.

"This really puts the tournament at the front of mind for the fans here and around the world.

“This ambitious launch demonstrates the lengths we will go to in making this tournament the most memorable ever – one that will inspire excitement among players and spectators alike around the world.

"To launch the domestic leg of our Trophy Tour in such a landmark location is fantastic, and we’ll visit many more memorable places as we engage with millions of people across England and Wales in the next 100 days."