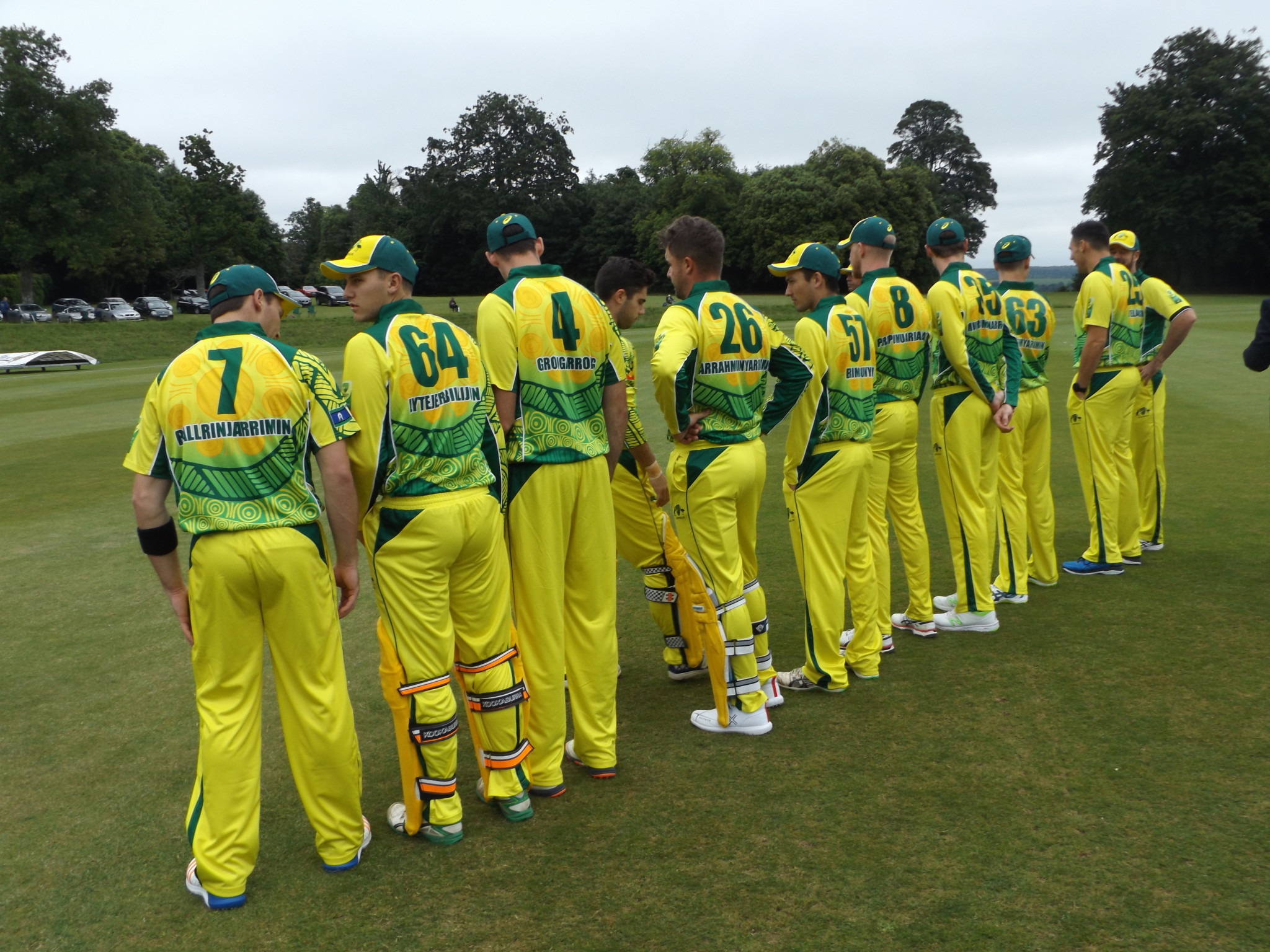 Australia's indigenous cricketers begun their anniversary tour of England at Arundel Castle with two victories in the course of an afternoon against the renowned Marylebone Cricket Club (MCC).

The tour commemorates the visit of the Aboriginal team to England 150 years ago.

This was not only the first cricket tour but the first trip overseas made by any Australian sporting team.

The first of the commemorative matches was preceded by a silk ceremony.

A large orange banner depicting Lord's Cricket Ground and cricket in an indigenous painting was carried by local schoolchildren as team mentor Peter Cooley offered a greeting on behalf of the visitors.

A specially designed stump adorned with indigenous designs was used as the middle stump of the wicket for the matches.

The Australian team uniforms are decorated with a design entitled "Walkabout Cricket" and are the work of Fiona Clarke, a descendant of the 1868 player Grongarrong, given the nickname "Mosquito" for the initial tour.

Many of the squad took the opportunity to meet descendants from the 1868 team and each player has been assigned a shirt bearing the name of one of those pioneer players.

He wears a shirt bearing the name of Unaarrimin or Johnny Mullagh, who scored 1,698 runs to top the batting averages in 1868 and took 245 wickets.

"I've got a fair bit to live up to," Christian said.

"He scored a lot of runs and took a lot of wickets.

"I am going to have to up my game to try and do him justice.

''We are very big on family, and representing your people and your 'mob' back home.

"We want to showcase the indigenous talent we have in cricket.''

MCC captain John Stephenson chose to field first in cloudy conditions and despite a big six in the final over from Ben Patterson, who made an unbeaten 49 from 23 balls, the touring team could only muster 150-8 in their 20 overs.

The bowling of Scott Boland, already an ODI player for his country, then restricted the MCC to 129 to give the tourists the first win by 21 runs.

As cloud cover dispersed, the MCC seemed to have posted a competitive 147-3 in the second match.

It was the cue for Australian captain Christian to play an inspirational innings of 78 not out.

He struck two huge blows at the end to guide the Australian team to victory by six wickets.

The men's team will for the first time be joined by a women's team which includes Australian World Cup player Ashleigh Gardner.

As they are pioneers in their own right, they will wear their own names on the backs of their shirts.

Before the new Millennium, Faith Thomas, who played for Australia's women in the 1950s, and Jason Gillespie were the only cricketers with Aboriginal heritage to represent Australia.

"Jason was huge for me," said Christian.

"I certainly looked up to him growing up.

"I am sure the other guys would tell you that as well."

The short tour will also see the team pay their respects to Bripumyarrimin, known as "King Cole", the player who died during the 1868 tour.

An enhanced memorial in Meath Gardens in East London has been installed.

The team will also re-trace the footsteps of the 1868 team with matches at Kennington Oval, Trent Bridge in Nottingham and Derby.

Some members of the party even went so far as to re-create a non-cricketing aspect of the 1868 tour by visiting horse racing's Derby at Epsom Downs.