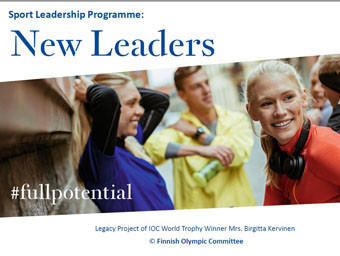 The programme is a legacy project of International Olympic Committee (IOC) World Trophy winner Birgitta Kervinen and supported by the EOC.

Its aim is to transform the sport movement by creating a new generation of young men and women who have the power to make significant changes with their ideas and actions.

From October 2018 to September 2019, three workshops and one conference will be organised with the joint collaboration of the National Olympic Committee (NOC) of Lithuania, the IOC and the EOC as well as the participation of 30 mentoring champions.

"To build an equal and modern culture of sport, it takes persistence," Kervinen said.

"It takes leaders who speak up."

The programme is targeted at men and women working in NOCs or in the Olympic Movement, as well as Olympians looking for career transition opportunities and who are eager to be part of its mission.

Personal motivation letters and support letters will be provided by the NOCs with 30 applicants due to be shortlisted by the end of August 2018.

The evaluation will be conducted by the FOK and the selection approved by the EOC Gender Equality in Sport Commission.

Kervinen also highlighted the need for an institutional transformation to achieve the goal of ethical leadership, including gender equality.

The former chair of the Finnish Workers' Sports Federation received her World Trophy last November during the IOC’s annual Women in Sport Awards in Lausanne.

She was recognised for her "tireless and long-standing efforts to promote gender equality in sport and society".

Kervinen has worked in both the European Commission and the Council of Europe and spent eight years as chair of the European Non-Governmental Sport Organisation until 2015.