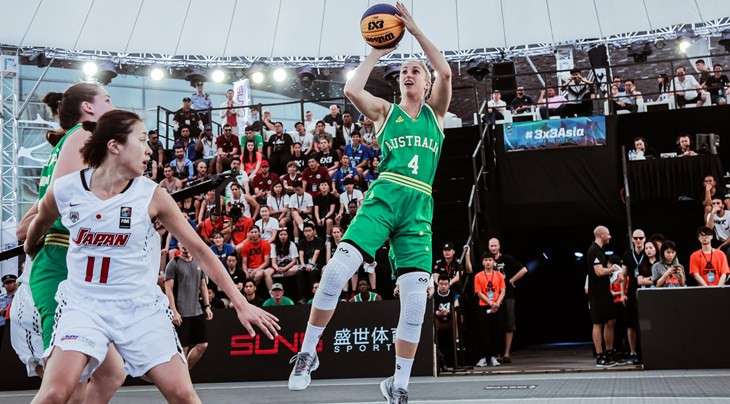 Having won all three of their qualifying matches, the Aussies secured top spot in Pool D with two victories out of two at the court alongside the Chinese city's Nanshan Cultural and Sports Centre.

They firstly beat Japan 20-14, with today's top scorer Rebecca Cole amassing 10 points, and then defeated Iran 22-3 in a tournament that has added significance because 3x3 basketball is due to make its debut on the Olympic programme at Tokyo 2020.

Awaiting them in tomorrow’s quarter-finals is set to be Indonesia, the runners-up in Pool B.

Uzbekistan topped Pool B having also won their earlier match against Jordan, 15-12.

Standing between them and a place in the quarter-finals are Japan, who secured second place in Pool D by beating Iran 20-16.

The two other women’s quarter-finals pit New Zealand against Chinese Taipei and Kazakhstan against hosts China.

Celebration time for Indonesia 🇮🇩 who made it to the #3x3Asia Cup quarter-finals 🎉 pic.twitter.com/sJ1fLGo3zB

In the men’s event, China kept up their unbeaten record by winning their two Pool B matches.

Their quarter-final opponents are due to be New Zealand, the Pool D runners-up.

Despite losing 19-14 to Australia in what was arguably the game of the day, the Kiwis recovered to overcome Kazakhstan 21-9 and book their place in the knock-out rounds.

Next up for them are South Korea, who bounced back from their defeat to China to beat Iran 21-13 and finish second in Pool B.