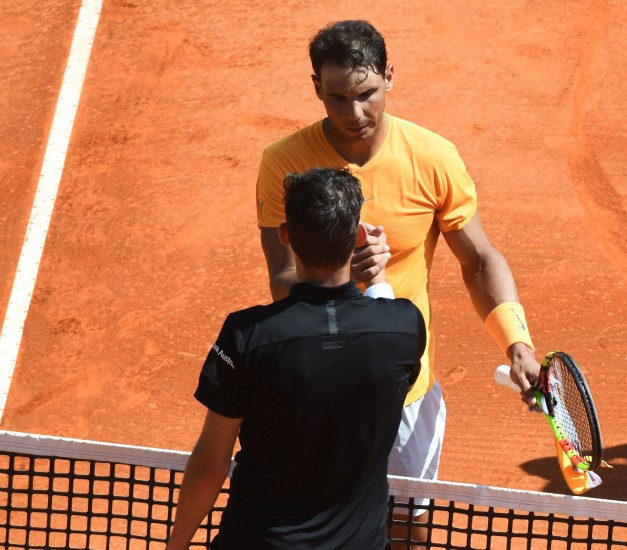 Rafael Nadal closed in on the 11th Monte Carlo Masters title he needs to retain his world number one ranking as he thrashed Austria’s fifth seed Dominic Thiem in the quarter-finals.

Thiem was viewed by many as Nadal’s biggest threat in Monte Carlo having beaten him on his favoured clay in Rome last year and reached this match by putting out former world number one Novak Djokovic.

Nadal is now meet Bulgarian fourth seed Grigor Dimitrov, who reached his first Monte Carlo semi-final with a 6-4, 7-6 win over Belgium's David Goffin, who let slip a 5-1 lead in the second set.

Thiem, aiming to become the first player to beat Djokovic and Nadal in the same clay-court tournament, was outclassed.

Nadal took the first set in just 31 minutes, winning four of his 11 break points and not facing one against his own serve.

Thiem avoided a double-bagel defeat by holding serve to trail 3-1 in the second set and was rewarded with a sympathetic ovation from the crowd.

But he failed to threaten Nadal's serve and the 16-time Grand Slam champion eased to an emphatic victory.

Nadal, aiming for a record-extending 11th French Open title when the tournament gets underway on May 27, has now won 31 of his past 32 matches on clay.

"I think I played a great match - the best of the tournament," he said.

"I played very aggressive, I knew I couldn't give Dominic time to hit the ball and I didn't."