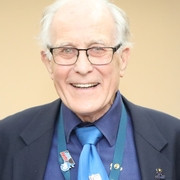 The International Wheelchair and Amputee Sports Federation (IWAS) have announced that honorary tresident Bob Paterson has been awarded the Member of the Order of the British Empire (MBE) for "Services to Paralympic Sport" on the Queen's New Year 2018 Honours List.

The Cabinet Office state that an MBE is awarded for "an outstanding achievement or service to the community, which will have had a long-term, significant impact and stand out as an example to others".

Upon receiving the award, Paterson, who was appointed unanimously as honorary treasurer for another term by the newly-elected IWAS executive board in December 2017, said: "I am totally stunned and feel very honoured to be awarded an MBE and I consider this to be in recognition of all the wonderful people in our IWAS organisation.

“I have been involved in Para-sport for nearly 40 years and I have seen so many changes from the early days of the Stoke Mandeville Wheelchair Games to the modern Paralympic Games.

"IWAS has been instrumental in creating the progression and opportunities we see today."

Paterson added: "I was very fortunate and privileged to have known Sir Ludwig Guttmann [the founder of the Paralympic Games].

"From a very early age in my life, he would often visit our home and as a young boy I would listen to him at dinner and find him totally awe inspiring.

"Sir Ludwig Guttmann would have been delighted by his continued legacy and would be proud to see how we have brought his vision forward."

In a statement on their website, IWAS said: "Bob has worked tirelessly in his support of organisations representing sport for persons with physical impairments spanning over four decades.

"His commitment to the transformation of the lives of people with impairments, through sport, has impacted on the experiences of thousands of athletes around the world."