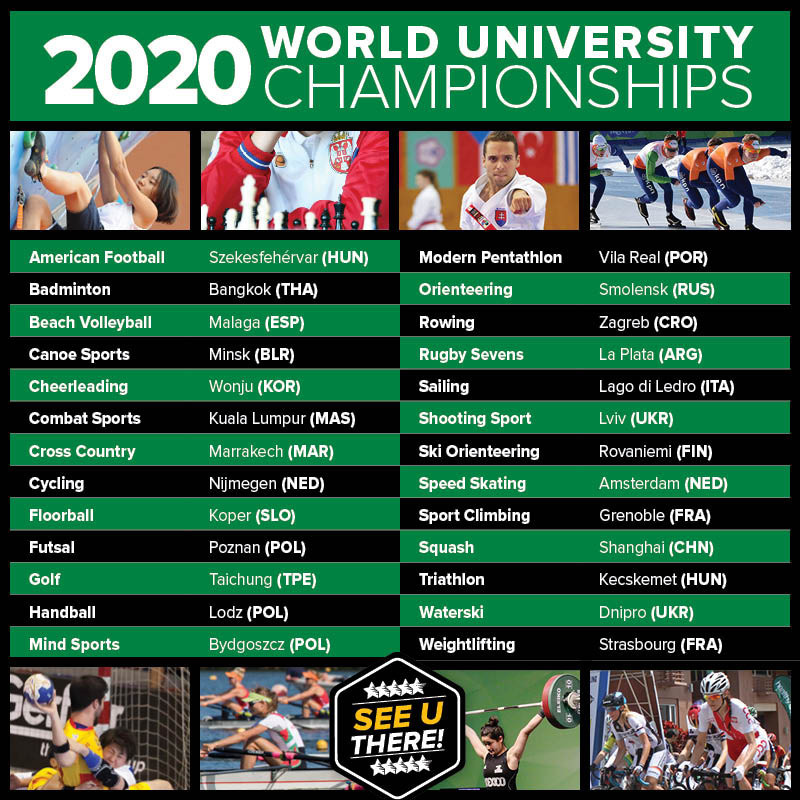 A total of 26 World University Championships have been awarded by the International University Sport Federation (FISU) for 2020.

FISU made the awards after a year of bidding procedures and official bid presentations in Lausanne during October.

The organisation said that 36 candidate cities put themselves forward to stage the 26 events on offer.

American football and triathlon will take place in the Hungarian cities of Szekesfehervar and Kecskemet respectively, while badminton and beach volleyball are due to be held in Thailand's capital Bangkok and Malaga in Spain.

Morocco will welcome a FISU event for the first time, with the country set to hold cross-country competition in Marrakech.

Poland have been awarded three Championships, with Poznan due to stage futsal, Lodz set to welcome handball and mind-sports taking place in Bydgoszcz.

FISU have awarded cycling and speed skating to the Dutch cities of Nijmegen and Amsterdam respectively, while the Ukrainian cities Lviv and Dnipro will hold shooting and water-skiing.

It will mark the first time Ukraine has welcomed FISU World Championship competitions, while Argentina will also debut as a host when La Plata stages rugby sevens.

Slovenian city Koper has been awarded the floorball event, with Taichung in Chinese Taipei receiving the golf competition and Vila Real in Portugal securing the right to host modern pentathlon.

Orienteering will take place at Smolensk in Russia, while Croatia's capital Zagreb is set to stage rowing and Lago di Ledro in Italy is due to welcome sailing competition.

Grenoble and Strasbourg in France have been awarded the sport climbing and weightlifting events, while the ski orienteering and squash competitions will take place at Rovaniemi in Finland and Shanghai in China.

FISU said that 2020 will be the inaugural year for new cluster events for mind and combat sports, which combine two and six disciplines respectively.

They claim the interest they received for both events suggests they will quickly grow to be popular and successful.

FISU also expressed their thanks to the federations who submitted bids for the competitions.