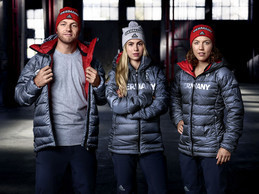 Germany's uniform for the 2018 Winter Olympic and Paralympic Games has been unveiled at a special ceremony in Düsseldorf today.

The German Olympic Sports Confederation (DOSB) held the event to unveil the clothing, designed by sportswear giants Adidas, which athletes will wear at Pyeongchang 2018.

It included the Opening Ceremony uniforms and the podium kit which will be worn by German competitors who claim medals at the Olympics and Paralympics next year.

Training gear was also revealed as part of the range, which contains around 50 items and comes under the motto "Our Team, The Look".

The launch event in the German city was attended by several of the country's winter sports stars, such as Olympic individual normal hill Nordic Combined champion Eric Frenzel and biathlete Luise Kummer.

Frenzel, one of Germany's main medal hopes at the Pyeongchang 2018 Winter Olympics, received a symbolic baton from Rio 2016 Olympic beach volleyball champions Lara Ludwig and Kira Walkenhorst during the ceremony.

"It was a remarkable event that once again showed what impressive athletes we have in our teams, even out of the competition," Dirk Schimmelpfennig, Germany's Chef de Mission for Pyeongchang 2018, said.

"They are self-confident and radiate strength and dedication in an exemplary and sympathetic way.

"The new outfit underlines this impression.

"Adidas has created a cool, idiosyncratic look here - with everything functional clothing has to offer today."

The Opening Ceremony uniform features a "Team Deutschland" badge made of leather on the jacket.

It also includes an urban street style in terms of material and colours, according to the DOSB.

The DOSB also claim the uniforms will ensure "athletes are equipped with the optimal clothing before, during and after the competition".

Athletes who represent the country at the Winter Olympics and Paralympics will also be given Adidas Terrex shoes for the Opening Ceremony and Supernova GTX trainers for training and for the podium.

Gracenote predicted the German team would win a total of 35 medals, including 14 gold, 12 silvers and nine bronze.

It would mark a vast improvement than at Sochi 2014, where Germany finished sixth in the overall standings with a total of 19 medals.