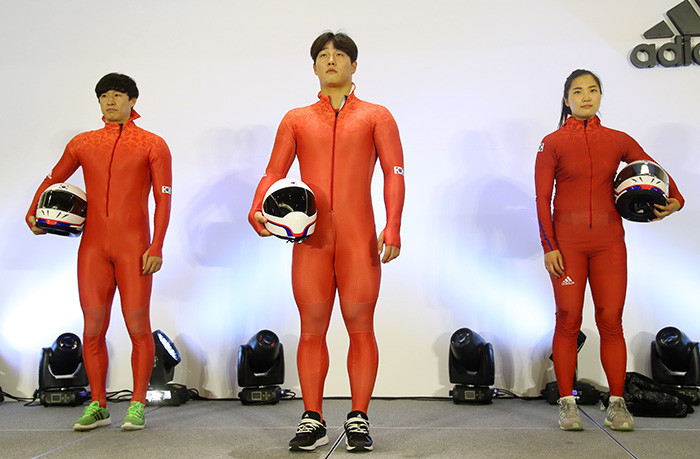 South Korea's bobsleigh and skeleton teams have unveiled their uniforms for their home Pyeongchang 2018 Winter Olympic and Paralympic Games.

The red uniforms were unveiled at the Alpensia Convention Center and are based on a painting of four sets of corner bars on the country's national flag, the Taegeukgi.

These represent the sky, earth, water and fire.

The fabric used in the bobsleigh uniform has a "four-way stretch" to let athletes speed up and to tighten muscle movements.

The skeleton uniform includes functions to help protect athletes from any cuts to their skin.

It also has features that tighten any shaking muscles.

According to the Korea Bobsleigh and Skeleton Federation, the uniform will "hopefully bring the energy from all these aspects of the universe, and bring peace - one of the Olympic spirits - to Pyeongchang".

Skeleton racer Yun Sung-bin said he had a "great feeling" about the new uniform and claimed it made him "more determined" about the Games.

The helmets to be worn with the uniform have been made by HJC, a Korean helmet maker.

The Alpensia Sliding Centre will host the bobsleigh, luge and skeleton events at Pyeongchang 2018.

Bobsleigh is expected to be among South Korea's best hopes for an Olympic gold medal in front of their home fans.

In February 2016, Won Yunjong and Seo Youngwoo became the first Asian sliders to win an International Bobsleigh and Skeleton Federation World Cup overall title with victory in the two-man season finale in Königssee in Germany.