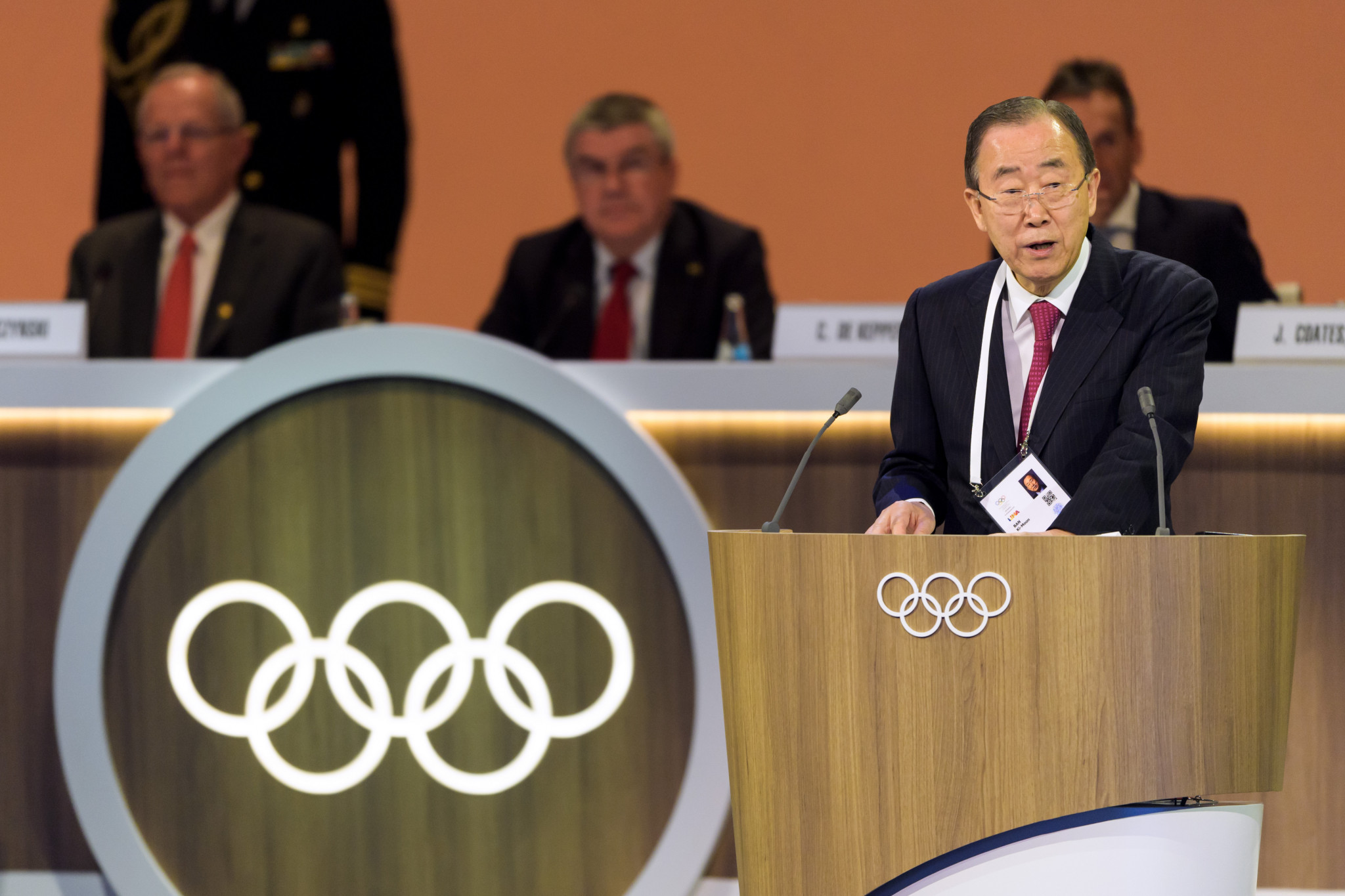 Members of the International Olympic Committee (IOC) are being forced to sign-up to a new document on "ethical principles" governing their behaviour on issues including conflicts of interests, the accepting of gifts, and the use of tickets for the Olympic Games, insidethegames can reveal.

The new rules, which go into far more detail than previous ones set out in the Ethics Code, have been introduced at a time where there are investigations into possible corruption surrounding bidding procedures for successive editions of the Olympic Games.

Reminders are currently being sent-out to IOC members to sign the new 27-page document.

The document must be completed by the start of the IOC Commission meetings in Lausanne on November 5.

It is compulsory for all members to sign it.

He has provided no indication, however, whether the IOC plan to implement more wide-ranging reforms recommended following an independent good governance review published by a Swiss business school in July.

Nuzman was yesterday officially charged by the Federal Public Prosecutor's Office in Brazil with corruption, tax evasion, money laundering and running a criminal organisation in connection to the city's successful bid in 2009 for the Olympic and Paralympic Games.

Namibia's IOC member Frankie Fredericks was absent from last month's IOC Session in Lima and has been provisionally suspended by the IAAF as he seeks to clear his name after allegedly receiving funds from Papa Diack during the same period.

"Given the importance of what is at stake in the candidature process and the risk of any perception of corruption by civil society, IOC members may not accept any gift, whatever its value, from a candidate city, its National Olympic Committee (NOC) or any person or entity acting on behalf of the candidature," it says in the document.

"In the same way, no invitation (receptions, sports events, etc.), advantage or promise of an advantage may be accepted by IOC members."

They must also remain in a "neutral position in all circumstances" during a candidate city process, unless they come from the bidding nation concerned.

In all other situations, members are told that they can only receive gifts from "another Olympic party or a third party" which is of "nominal value".

All others must be passed on to the Olympic Museum in Lausanne.

Those considered as acceptable gifts include promotional items with the mark logo or emblem of the donor, such as pins, tee-shirts, sports bags, ties and scarves.

Local craft objects, topical photos or books and "consumables" such as chocolates, confectionery, local specialties or "inexpensive wines" are also considered reasonable, as are medals commemorating participation in sporting events.

A "non-exhaustive" list of unacceptable gifts including luxury brand items, "such as bags, clothing, watch, pens, wine, spirits", is included, along with electronic equipment, including "cameras, smartphones, TV, computers and tablets".

Objects made using "gold, precious metals and stones" are also banned, as is "any sum of money or gift vouchers".

"Furthermore, IOC members must not, directly or indirectly, solicit, accept or propose any concealed remuneration, commission, advantage or service, in any shape or form, that is linked to the Olympic Games," the document adds.

"For example, a member may not be remunerated for an activity linked to the Olympic Games."

The need to avoid conflicts of interests is repeatedly made clear.

Members must speak to the ethics and compliance office if they are aware of a possible direct or indirect breach.

This includes financial and business interests both of the individual themselves, as well as members of their families.

A series of example scenarios are then given.

One, for instance, presents the situation where a "member of your family is on the Board of a big hotel chain"...which is "involved in the call for tenders to choose the hotel which will accommodate the IOC members at a forthcoming Session".

They are then told to pick from the three below options before it is explained why each is correct or incorrect.

Other scenarios concern if your "company makes equipment for a sport which is a candidate for inclusion on the Olympic programme" or if "you are friends or have a professional relationship with a person who is a candidate for IOC membership".

Olympic ticketing is another area mentioned heavily in the new document.

Former IOC Executive Board member Patrick Hickey remains temporarily self-suspended after being arrested last year as part of a Brazilian inquiry into the handling of tickets at Rio 2016.

The Irishman denies all wrongdoing but is still facing charges of theft, tax evasion, money-laundering and criminal association after hundreds of tickets to Olympic events were seized by police and his trial is due to begin on November 29.

"The IOC offers its members the opportunity to purchase a limited number of tickets for the Olympic Games via the online registration platform," reads the new rules.

"Such tickets may be used only by the members themselves, their families or their accredited guests.

"Tickets are strictly non-transferable and may not be sold or offered for sale, whether via the internet, the press or any other channels.

"When buying tickets for the Olympic Games, IOC members undertake to comply and ensure compliance with the applicable terms and conditions.

"In particular, you are prohibited from reselling tickets or using them for promotional, fundraising or marketing purposes.

"If IOC members wish to buy a larger number of tickets, they can do so by using the official points of sale, their NOC or the authorised reseller."

Specific rules are also outlined on procedures for flying on IOC business.

In principle, the IOC travel agency Carlson Wagonlit Travel must be used for all flights.

If, in "exceptional circumstances", tickets are purchased via another travel agency, members will only be reimbursed by a "reference price" established by the IOC in the corresponding class.

It adds: "If the 'reference price' is higher than the cost of the ticket purchased, the difference will not be paid, nor can it be used for the purchase of other tickets."

All members seeking to use a "private jet belonging to a third party" for IOC-related travel must receive prior approval from the IOC director general and ethics and compliance officer beforehand, and will not receive any reimbursement.

The document also sets out the current IOC ethics procedures which involves the ethics and compliance officer, Päquerette Girard Zappelli, reviewing all cases before, if she so wishes, they are sent on to the Ethics Commission for a final verdict.

The IOC have made it clear that the new document represents principles that existed already and that it was circulated among members during the Session in Lima.

In a letter sent to all IOC members and Presidents of International Federations and NOCs, also seen by insidethegames, Bach also praised this format before urging members to propose changes directly to him or Girard Zappelli - rather than going public.

"Since we are all in sport, we know that nothing is so good that we cannot make it even better," Bach writes.

"Therefore, as always, your ideas, comments and proposals are very much welcome.

"I would appreciate it if, in everyone's interest, your input could be brought forward directly to the IOC chief ethics and compliance officer, to me, or during the forthcoming meetings of the IOC Commissions in November."

Bach does not, however, refer to the supposedly ongoing process to implement reforms proposed in July by the Lausanne-based International Institute for Management Development (IMD).

Ideas raised there included granting more "independence" to the IOC Ethics Commission to investigate cases of non-compliance as well as stronger sanctions for non-compliance in cases of a conflict of interest.

They also called for greater training and awareness of these issues to be granted to staff and members while, in the longer term, they suggested how the IOC "should consider delegating its sanctioning powers to an independent third party, organisation or commission".

An IOC spokesperson has told insidethegames that the IOC Audit Committee chaired by Belgium’s IOC member Pierre-Olivier Beckers-Vieujant will "follow up" on the implementation of IMD's recommendations and "provide regular updates to the IOC Executive Board".

insidethegames understands that several IOC members are also in the process of demanding similar changes.