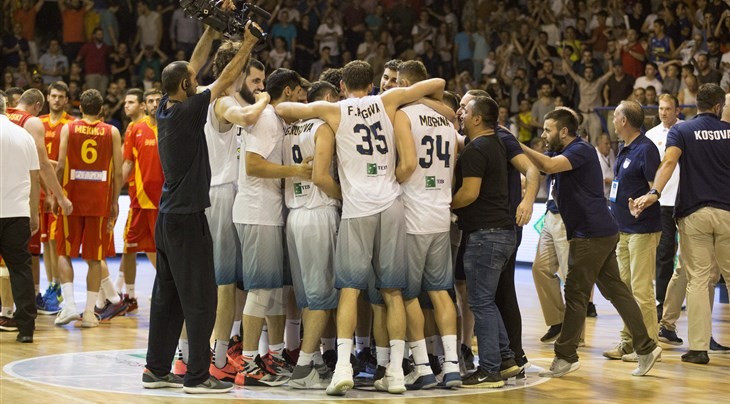 Kosovo registered their maiden international basketball win at the European pre-qualifiers for the 2019 World Cup in China.

The country, which was accepted as a member of the International Basketball Federation (FIBA) in March 2015, beat Macedonia 72-68 today in front of a home crowd at the Pallati i Rinise dhe Sporteve Prishtina.

Despite allowing a two-digit lead to be reduced to as little as two points in the fourth quarter, the hosts managed to survive down the stretch and secure a winning start to their Group C campaign.

Leonard Mekaj kept his cool from the free-throw line to clinch the victory.

Kosovo made their senior competition bow in attempting to qualify for EuroBasket2017, which is scheduled to be held from August 31 to September 17.

They missed out on qualification, however, after losing all six of their Group E matches.

Great win for our basketball national team. They won against #Macedonia, 72:68 for #China2019 qualifiers. Congratulations!#KosovoBasketball pic.twitter.com/GBWbjtMYyV

The decision to accept Kosovo as a member was taken during a FIBA Executive Committee meeting in Swiss city Geneva.

It saw FIBA become one of numerous governing bodies to formally approve Kosovo's membership after the International Olympic Committee granted full recognition to the Kosovo Olympic Committee at its Session in Monte Carlo in December 2014.

The Kosovo Basketball Federation (KBF) applied to FIBA for recognition on February 5, 2015, despite opposition from Serbia, the nation from which they declared independence more than seven years ago.

Serbia, runners-up at the 2014 FIBA Basketball World Cup in Spain, refuses to accept Kosovo's independence and was therefore against the country becoming a FIBA member.

However, Kosovo has been recognised by 111 of the 193 United Nations member states and 23 of the 28 European Union member states.

The KBF had been denied entry into the FIBA up until March 2015, with the most recent rejection prior to that coming at the governing body's annual Central Board meeting in Beijing in April 2008.