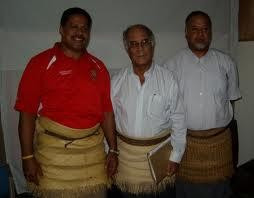 Tonga's Government has officially pulled the plug on the country's hosting of the 2019 Pacific Games, it was announced today.

The Pacific Games Council (PGC) confirmed they had received notification from the Government, with chairman Vidhya Lakhan conceding it was an "extremely disappointing and confusing decision".

Tonga seemingly withdrew from staging the Games earlier this week amid concerns the country could face economic difficulties if it went ahead.

The PGC have only today been formally notified of Tonga's withdrawal, however.

The organisation claimed they were "not consulted in this decision and no attempt was made to seek the PGC's assistance to address the Government's financial concerns with respect to staging the Games".

"This is an extremely disappointing and confusing decision which robs Tonga's youth and its future generations of the golden opportunity to receive badly needed sport and recreational facilities as well as the chance to develop their human resources capacity through being involved in a nation-building event," Lakhan added.

"Tonga's citizens and businesses will also now miss out on the many vital employment and commercial opportunities associated with the heightened economic activity around the Games."

Cabinet minister Hon Pohiva Tu’ionetoa made the announcement in a press conference today, with a statement from the Tongan Government admitting it would be too much of a financial strain on the nation.

"Over the last two years, the Government's determination and efforts to mobilise financial resources to fund the preparations for the Games has been an enormous challenge," read the statement according to Matangi Tonga Online.

"Should Tonga continue to strive to host the Pacific Games, the Government was concerned that this will jeopardise the Tongan economy and derail Tonga's macroeconomic stability and its ability to deliver its national priorities.

"Even though the Government cannot fulfill its obligation to host the Games at this critical stage; it will dedicate its efforts to strengthening the infrastructural facilities and cultivate sport development in the country, to enable it to host the Games in the future."

Tonga's withdrawal on Monday (May 15) sparked speculation as to who would step in as hosts of the 2019 Games.

Fiji Association of Sports And National Olympic Committee (FASANOC) President Joseph Rodan has given his strongest hint yet that the country would be willing to replace Tonga.

Rodan had admitted it was a possibility in October of last year amid concerns over Tonga's ability to stage the event.

In an interview with the Fiji Times, Rodan warned, however, that any bid would need the backing of the nation's Government and finances would be the "main issue".

"We are so well organised and capable of hosting any Games and it is not a problem," he said.

"That is the way I look at it.

"Finance would be the main issue and Government has to approve the hosting of the Games at the end of the day.

"In Fiji, we have been hosting the Melanesian Games and Oceania Games and had been organised very well.

"Finance is a big issue and we have the best people who can organise different sports.

"Before Fiji bids to host the Games, we have to meet with the Ministry of Youth and Sports and Government, and once they give us the approval then we can go ahead and bid."

The comments from Rodan come after Papua New Guinea Sports Minister Justin Tkatchenko confirmed they "would not commit" to hosting the Games in 2019.

Papua New Guinea, who played host to the 2015 edition in Port Moresby, are considered one of the more developed Pacific nations and therefore one of a select pool of countries which could be capable of staging the event at short notice.

"Papua New Guinea will not commit to host the 2019 Pacific Games, after the withdrawal of Tonga," Tkatchenko said on Facebook.

"Tonga's withdrawal is upon World Bank advice on the economic difficulties it will face if it continues to host the Games.

"While the National Government understands the circumstances that led to the decision by the Tongan Government, PNG will not make any commitment.

"The critical decision is now for the PGC to make, for the benefit of sport and our people of the Pacific Islands."

A spokesman for the Tongan Cabinet told Kaniva News earlier this week that Prime Minister ʻAkilisi Pōhiva had decided to save the country from what has been described as a "costly mistake".