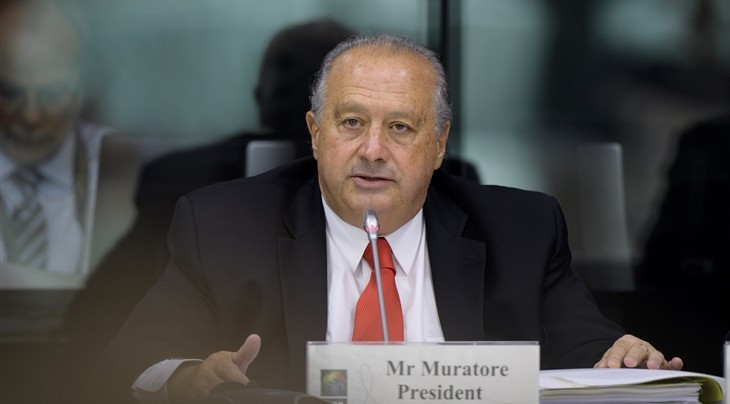 Due to be rolled out in November, FIBA’s new competition system will involve national teams playing regular home and away games over a four-year cycle, which will be used as qualifiers for the 2019 World Cup and the 2021 Continental Cups.

"We are looking forward to November and the action getting underway, but even before then to May, when we will have the draw for the FIBA Basketball World Cup 2019 qualifiers," Muratore said.

"The new competition system is something we have been talking about since 2010 so I hope everybody in basketball is as excited about it as we are.

"The national team is the best product you can have in sport, so this change represents everything that will help basketball to grow all over the world.

"We hope it will turn out to be a huge success.

"We are aware that some stakeholders in the basketball family have some doubts, but we remain convinced that when the new competition system tips off in November, everyone will realise it is in the best interest of our sport's entire community."

Muratore claims reaction towards the new competition system has been positive from National Federations and other key basketball stakeholders.

"Overall, people are happy and excited to see their national teams playing at home on a regular basis," the Argentinean added.

"This new era brings with it considerable change and understandably our National Federations see the size of the challenge ahead.

"Therefore we are working closely with them to help in this transition so that they get the most out of it.

"The new system will have even more impact for the National Federations that never had the opportunity to compete in high-level basketball tournaments because the level of development of the sport in their country or territory was insufficient.

"I understand them because not playing often meant they did not exist.

"They had no support from the Government, from sponsors or from fans and their youths would then be distributed among other sports.

"I love all sports, but as FIBA President, I want more young players to play basketball.

"So the opportunities that the new competition system presents will help National Federations develop our sport where they are."

In February of last year, FIBA announced it had entered into a long-term partnership with Perform Group, which saw the company become the world governing body’s global partner for the distribution and sale of all media-related rights.

The deal between the two organisations covers four FIBA Basketball World Cup cycles between 2017 and 2033 and includes more than 5,000 matches.

FIBA’s agreement with Perform, one of the leading digital sports content and media groups who are based in Great Britain, prompted the creation of FIBA Media - a joint venture aimed at "increasing the value of the basketball fan experience".

Muratore says that through the partnership, FIBA can ensure "high level and consistent TV production standards".

These are provided free of charge to the National Federations for all games of the 2019 FIBA Basketball World Cup qualifiers.

"FIBA has committed itself to supporting its National Federations and this is done through many initiatives," Muratore added.

"Not only do we provide financial support such as TV production, players' insurance and covering costs of officials, but we also assist on the technical side too, by having an e-learning platform as well as a number of digital tools and holding workshops.

"All of these initiatives are hugely beneficial to the National Federations.