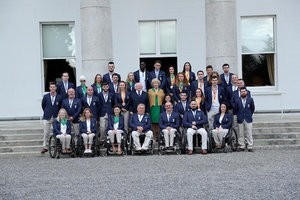 Members of the Irish team at the Paralympic Games in Rio de Janeiro have attended a reception hosted by President Michael Higgins at his official residence.

The event at the Áras an Uachtaráin was held to mark the success of the Irish team at the Games after they returned with a haul of 11 medals, four of which were gold.

Dunlevy also won a silver medal in the road race B competition and Clifford was also able to add to his collection as he picked up bronze in the C3 3,000m individual pursuit.

Ireland’s performances in the Brazilian city saw them finish in 28th place on the medal table.

During the reception, Higgins, elected President of Ireland in 2011, and his wife Sabina individually greeted each member of the team before he gave an address to the assembled audience.

"On behalf of everyone who loves sport, everyone who followed with great pride and interest your sporting endeavours in Rio, I am delighted to welcome you to Áras an Uachtaráin to this celebration of your efforts and achievements at the second-largest sporting event in the world, the Paralympic Games," Higgins said in a speech to guests.

"All of you athletes in this room know more than anyone else that in sport there is never certainty about the outcome, there are no certain winners, but there are always courageous and committed athletes.

"We in Ireland are proud of you and are very grateful to you for going the distance of your training and participation, making so many sacrifices, to be the very best, and to be Ireland’s best."