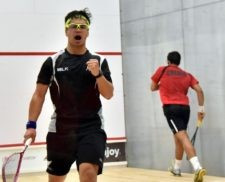 The ninth seeds, who finished in 18th place in the 2014 Championship in Namibia, are led by Jamie Oakley, the 18-year-old son of Kiwi squash legend Susan Devoy, the four-time world champion.

Oakley put the underdogs into the lead when he beat Michael Mehl 11-6, 13-11, 11-7 at the Enjoy Squash venue in the Polish city of Bielsko-Biała.

Scott Galloway, however, clinched the decider for New Zealand by beating Rahul Sehrawat 11-8, 11-7, 11-5 to put his team through to the quarter-finals, where they will face favourites Egypt.

Australia also claimed an unexpected place in the final eight after seeing off South Africa.

The number ten seeds, now guaranteed a top eight finish for the first time for 14 years, line up against second seeds and fellow former champions Pakistan for a place in the semi-finals.

Hosts Poland celebrated their first ever win in the Championship with a 2-1 victory over Zimbabwe.

The 20th seeds then went down to Switzerland, the number 14 seeds, and now face Argentina in the 17th-20th place play-offs.

Elsewhere in the competition, United States saw off Jordan to progress to the next round.

Andrew Douglas lost to Mohammad Al Sarraj in the first match, but victories by Samuel Scherl and Spencer Lovejoy were enough to guarantee their place in the next stage.

Also through are England who comfortably beat Hong Kong 2-0.