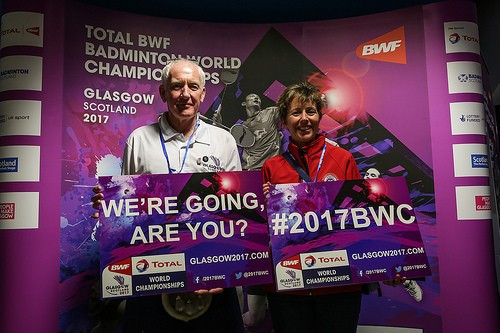 A pre-sale ticket phase for the 2017 World Championships in Glasgow has been launched to allow fans to secure seats for the event two weeks before they officially become available.

Interested supporters can register online to guarantee themselves the best tickets for next year’s Badminton World Federation (BWF) event, which takes place at the Emirates Arena from August 21 to 27.

Seats for the World Championships in the Scottish city are due to go on sale to all members of the public on June 6.

It is set to attract the sport’s leading names who will compete for badminton’s biggest prize outside of the Olympic Games.

The current world men’s and women’s singles champions, China’s Chen Long and Carolina Marin of Spain, are both expected to compete.

The duo could arrive in Glasgow having also won Olympic gold at the upcoming Rio 2016 Games.

“We can’t wait for this latest opportunity to show what a great spectacle Glasgow can stage.

“The city has a world-class reputation for staging major sporting events and badminton is firmly established as playing a key part in achieving that accolade.

“But to maintain that reputation we need the support of the badminton fraternity.

“So why not book early and guarantee yourselves the best seats in the Emirates Arena?”

Scotland was chosen to host the 2017 World Championships in November 2014 but failed with its bid to bring the Surdiman Cup, the world mixed team championships, to the country.

Their attempt lost out to Gold Coast, the host city of the 2018 Commonwealth Games, but the country agreed to host the World Championships instead.

The Championships was open for bidding at the same time as the Sudirman Cup but the BWF did not receive appropriate bids.

Staging the BWF’s flagship competition marks the latest in a long line of sporting events to be hosted in Scotland, including the 2015 Artistic Gymnastics World Championships and the 2015 International Paralympic Committee Swimming World Championships.

“Scotland has proven it is a world leader when it comes to sporting events over the past few years and the BWF Badminton World Championships 2017 is sure to be another spectacular occasion on our event calendar,” VisitScotland director of events Paul Bush added.

“The event will contribute greatly to Glasgow’s reputation as one of the world’s top 5 sporting cities and provide opportunities for citizens, both young and old, to engage with the sport.

“For badminton enthusiasts, priority access tickets represent a terrific opportunity to confirm their attendance well in advance of the championships, and ensure they have optimum seats for witnessing the making of history from August 21-27 2017.”

Ticket information can be found here.